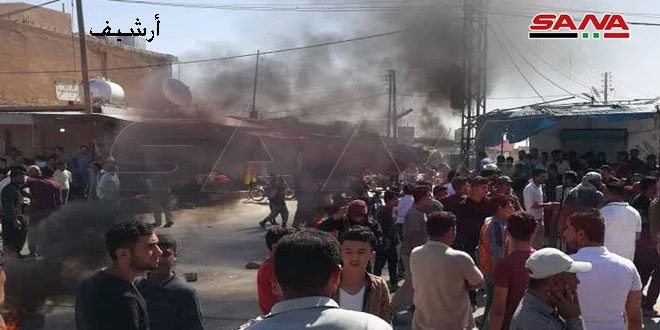 SANA reporter quoted local sources as saying that the locals protested at Tal Hamis square against the brutal practices of Qasad  in light of the US occupation-backed Qasad “SDF” groups control over their daily life.

The protesters demanded that Qasad groups to release the youths that they have arrested yesterday.

On Tuesday, the town witnessed protests against the brutal practices of Qasad groups against the locals after establishing control over the institutions and service facilities in the town.

Protests Qasad Tal Hamis 2020-07-01
hala
Share
Previous Rouhani: US and other states work on igniting crisis in Syria
Next Weapons and ammunition left behind by terrorist organizations in Aleppo northern countryside