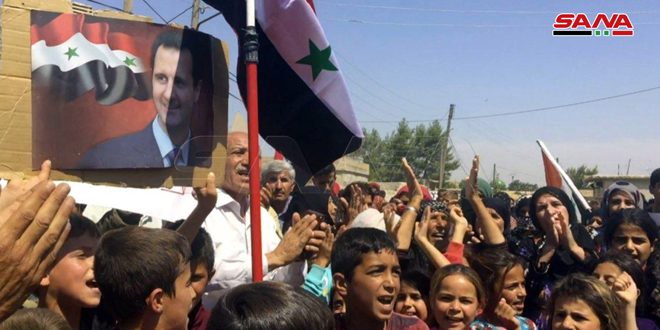 Hasaka, SANA- Popular protests against the US and Turkish occupation forces and in rejection of the so-called “Caesar Act” continued in Hasaka province.

The locals in Hamou village in Qamishli area on Tuesday staged a national gathering to denounce the new chapter of the hostile war against Syria represented by the so-called “Caesar Act”. 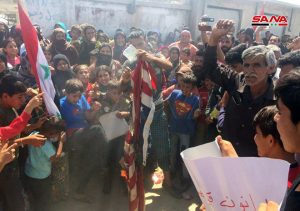 SANA reporter in Hasaka said that during the gathering, the locals in the village of Hamou held up placards and chanted slogans denouncing the hostile practices of the occupation forces, stressing categorical rejection of the so-called “Caesar Act”.

They also called for unifying the stances in facing the effects of the unfair siege imposed by Washington and its allies on Syria, and to ease its repercussions.

The reporter added that the locals also denounced the US unilateral coercive economic measures targeting that Syrian people and affected vital sectors, particularly the health sector.

They also expressed rejection of the US and Turkish presence in Syria and their intervention in the internal affairs of Syria, and the economic blockade against the Syrian people.

Denouncing gathering hamou Turkish US 2020-06-30
hala
Share
Previous SANA reporter: Locals in Hamou village in Qamishli countryside protest against US and Turkish occupation forces and the US siege and so-called Caesar Act.
Next Qasad groups dismantle railways in Deir Ezzor to smuggle and sell them