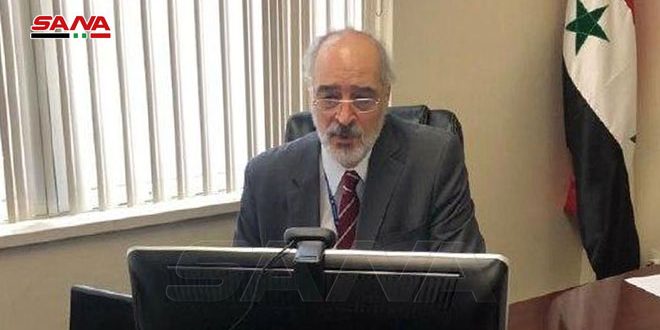 New York, SANA-Syria’s permanent representative to the UN, Dr. Bashar al-Jaafari, called on the states that pledged and adhered to respecting the international law to put an end to the politicization of the humanitarian issue in Syria and support its efforts in the humanitarian and developmental domains, as well as to reject political conditions and dictates by some countries to hinder the reconstruction process and the return of the displaced.

“Some Security council member states have gone far in their hostility to Syria until they became fully helpless  to do any positive role regarding the situation in Syria and the region, and a good proof about that is the silence imposed on Security Council to turn it into a platform for NATO against Syria,” al-Jaafari said during a session for the Security council  on the situation in Syria via video conference.

He stressed that the Security Council should deal with the main reasons behind the crisis in Syria in order to find solutions to them in a way that should restore stability and improve the humanitarian situation and end the US-Turkish occupation and put an end to their crimes, including the destruction of infrastructure and looting the Syrian resources and burning the agriculture crops, in addition to supporting efforts of the Syrian state   and its allies to combat terrorism and immediately lift the unilateral coercive measures.

Al-Jaafari pointed out that the so called “co-penholders ” at the Security Council are preparing a draft resolution to extend the effects of resolution no.2165 concerning work beyond borders.

He reiterated Syria’s rejection of such resolutions, which are away from the humanitarian goals and the rules of resolution no. 46/182 which aims to serve the agenda of countries which are hostile to Syria and undermine Syria’s sovereignty and its territorial integrity, according to the politicized allegations of the UN Office for the Coordination of Humanitarian Affairs “OCHA” and its distorted reports.

He  addressed the representatives of NATO states at the Security Council, wondering, “Do you support the International Law and the UN Charter or support the Turkish, American and Israeli occupation to parts of Syria, adding “Do you respect what the Council’s resolutions had stipulated about Syria’s sovereignty and territorial integrity or do you support the efforts that aim at Turkification, dividing and continuity of destabilizing security and stability in the region.

Al-Jaafari added “Do you believe in the principles of humanitarian work, or besieging the Syrians, intimidating and fighting them in their livelihood and medication are easy things for you, as long as this serves the interests and agendas of some of you .

He wondered how those states explain their silence about Erdogan prevention of the Humanitarian convoys from arriving areas in Syria that he occupies, as the case for a convoy that was supposed to head for al-Atarib area and its surroundings, which was approved by Syria on April 14th and has not been  implemented by OCHA yet.

Al-Jaafari also asked If they prevented the Security Council from carrying out its basic responsibilities in maintaining international peace and security, what is the alternative international reference that can belong to  the principles and purposes of  the United nations.

“President of the Security Council’s invitation for perjuries to submit a briefing in front of the Council doesn’t serve the noble issue that it has been dealing with throughout more than 100 sessions and till now which represents deliberate misuse of its mechanism with the aim of misleading its members and distorting the facts”, Al-Jaafari concluded.