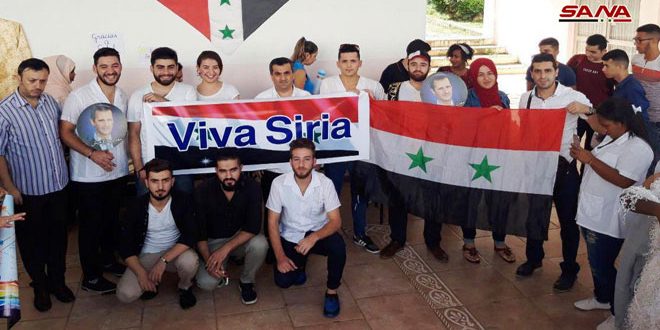 Havana, SANA- Students and members of the Syrian community in Cuba condemned the US unilateral coercive measures which target the Syrian people, affirming that they are considered an outrageous violation of the international laws and norms and human rights.

In a statement, students and members of the community indicated that these unjust measures come in the framework of the terrorist war waged against Syria from more than nine years, and they affirm that the US administration which has failed in achieving its schemes through the military terrorism is trying to achieve that through the economic terrorism which targets the Syrian people’s livelihood.

They demanded lifting these measures which are considered a crime against humanity, affirming that no one will be able to undermine the will of Syria’s people and army as Syria has been able to defeat all forms of aggression and colonization and to overcome all the crises throughout history.

The students and members of the community affirmed their standing by their home land till achieving victory.

Hasaka, SANA- With the aim of reinvesting terrorist groups and using them to implement Washington’s …