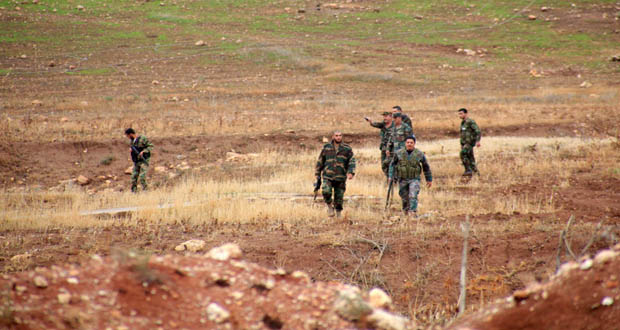 Provinces, SANA- Units of the armed forces carried out operations against dens and gatherings of terrorists in several areas across the country, inflicting heavy losses upon them.

The army clashed with terrorists in many areas in Harasta, eastern al-Ghouta, and Jobar, killing large numbers of terrorists and destroying their hideouts, concentrations and tunnel networks.

The army currently controls over half of Jobar neighborhood and has managed to cut off terrorists’ supply line and destroy many of their tunnels and ditches.

The army also advanced in Zibdin area in eastern al-Ghouta after clashes that resulted in the killing of a number of terrorists, among them non-Syrians as Suhail Obeidat, from Jordan.

The army killed 7 terrorists and injured others in al-Nashabyeh and clashed with terrorists in Daraya, inflicting direct losses upon them.

Army units killed and injured a number of terrorists in al-Moadamiyeh, al-Khashabiyeh, Jurouh, Qleib al-Thour and al-Hadaj in the countryside of the central province of Hama.

A military source told SANA that the Army units killed scores of terrorists and destroyed their vehicles in the area surrounding al-Shaer gas field, al-Balas mountain and to the east of Jazal oil well in the countryside of the central province of Homs.

A source in Hasaka province said that the army units killed numbers of terrorists and wounded others in Makhroum and Um al-Kubar villages, at al-Siddeeq junction in Jabal Abdullaziz area on Tal Tamr road and in al-Meinbiyeh, Sabah al-Kheir and al-Khamael in the countryside of the northeastern province.

An army unit established control over a number of blocks and buildings in the city of Bosra al-Cham in Daraa province, eliminating a number of terrorists who had barricaded themselves inside them.

The unit also prevented terrorists from attacking army points and residential neighborhoods in the city which is located 40km east of Daraa city, inflicting heavy losses upon them.

Other army units killed a number of terrorists and injured others in al-Karak neighborhood, south of al-Abasiye automatic bakery, around the old customs building, and in al-Bajabeja neighborhood in Daraa al-Balad, destroying a number of their vehicles as well.