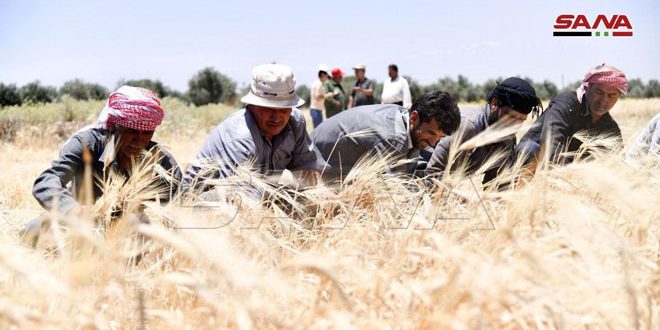 Damascus Countryside, SANA- Despite the spread of the novel coronavirus (Covid-19), peasants continue to work tirelessly, defying the economic war and the coercive measures imposed on Syria.

The cold weather pushed the village farmers to start harvesting the rainfed barley crop amid a clear variation in the production and quality of the crop from one field to another, where the majority of peasants considered the season similar to the last season in terms of the production.

Regarding the prices at which the crop is sold, the farmers emphasized that the recent cabinet decision to raise the price of receiving the wheat crop from them for the current season from 225 Syrian pounds to 400 per kilogram is correct and encourages farmers to continue implementing the agricultural plan.

SANA’s camera accompanied the farmers in the town of al-Kisweh, southern Damascus, where the barley crop is being harvested. Farmers defy all conditions, proving to the whole world that Syria is capable of producing and achieving self-sufficiency.