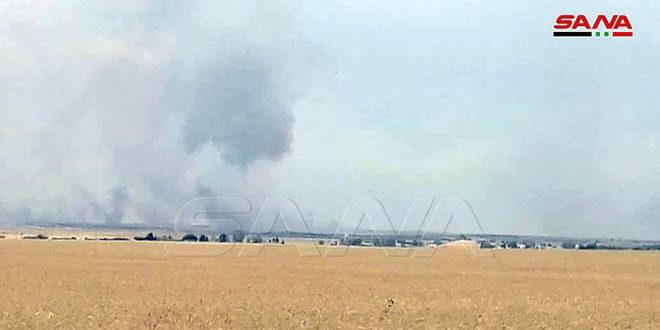 Hasaka, SANA- Burning agricultural crops in the Syrian al-Jazeera region, especially wheat, to empty the Syrian basket of its bounties is another goal that unites the American and Turkish occupation forces in an aggressive behavior and a violation of international laws that amounts to a war crime added to other crimes committed by those occupying forces against the Syrians and their state.

Previously prepared crimes committed by the Turkish occupation forces and its mercenaries of terrorist groups are in line with the attacks of the US occupation forces and armed groups which are subordinate to their orders starting from shelling cities and regions, destroying their infrastructure and displacing citizens from their homes, through a policy of killing, looting, kidnapping, and armed robbery against the people and their properties, and don’t end with burning tens of thousands of hectares planted with wheat and barley in the areas where they established their illegitimate bases and occupation points and in the safe areas adjacent to them on Syrian lands.

Deliberately setting fire to the strategic wheat crop through which the Syrians have achieved over dozens of years self-sufficiency and it has constituted a major pillar of food security in the country as nowadays it  has become a clear target in the context of an economic war and unjust starvation policy practiced by the US and the new Ottoman Turkish regime against the Syrian people and their state after their failure along with their tools of terrorists in their aggressive war and their attempt to subjugate  the Syrians who reject the occupation forces and its allies.

The American and Turkish aggression takes many forms and it is practiced in various ways with the diversity of its tools and the multiplicity of its chapters, and it is translated also in the continued burning of agricultural crops by the occupation forces in a way that doesn’t only affect the Syrian economy, but the direct goal of it is to impoverish the owners of the lands from the local population and force them under pressure of need and poverty to work with the US and Turkish occupation forces, and to force them to agree to send their children to fight in the ranks of terrorist groups, especially in light of the growing public rejection of the presence of the occupation forces and its mercenaries in the region, as over the past few months, the locals have attacked dozens of vehicles and armored vehicles for the US occupation forces and intercepted them and forced them to return back to their illegal bases.

The American and Turkish occupation forces have established illegitimate bases and military points in several areas in the Syrian al-Jazeera region as they supply them with weapons and logistical equipment through illegal crossings with Iraq to enhance their presence in order to steal the Syrian oil and major agricultural crops in cooperation with terrorist organizations.

The crime of burning wheat crop in Syria comes in the context of the American and Western terrorist and economic war against the Syrian people, and it is an American plan prepared in advance in implementation of direct orders from US President Donald Trump according to an international media report published by the “International Business Times” news website in its version issued in Singapore few days ago which indicated that “The US occupation forces were carrying out orders approved by the White House and that Trump signed orders to burn agricultural lands in Syria. ” And the fires which have erupted in the fields in southern Syria may be part of that plan as observers say.

Earlier, local and media sources have confirmed that the “Apache” aircrafts of the American occupation forces began deliberately since the approach of the harvest season of wheat and barley crops to throw thermal balloons while flying at a low distance over the agricultural fields, causing a number of fires in the wheat and barley fields in a number of villages in the city of al-Shadadi, south of Hasaka City.

The sources added that groups of mercenaries from the Turkish occupation set fire to a number of wheat and barley fields in a number of villages in the cities of Tal Tamir and Abu Rasen in the countryside of Hasaka, and the fire destroyed about 20 thousand dunums of these fields, in addition to targeting these fields by the mercenaries with mortar shells similar to what they have done in the villages of Umm al-Kef, al-Dardara and al-Tawila in Tal Tamir countryside, and in the villages of al-Manajir, al-Ahras, al-Amriyah, Tal Atash, and Arat Abu Bakr in Ras al-Ayn area, which led to the burning of thousands of dunums as well.

In parallel with setting fires deliberately, the Turkish occupation forces and its mercenaries intend to steal crops by exerting pressure on the people to sell them at the cheapest prices and smuggling them into Turkish territories as yesterday they brought a number of harvesters to the occupied area of Ras al-Ayn in Hasaka northern countryside to steal agricultural crops and smuggle them to the Turkish territories, in addition to seizing a part of the production after threatening the farmers to burn their wheat and barley fields if they don’t comply with the pressures imposed on them.

The vandalism and destruction agendas prepared by the US administration integrate with the aggressive behavior of its regional client in the region, namely Erdogan and his terrorist mercenaries, in light of the spread of the Coronavirus pandemic, and they make US-Turkish practices rise to the level of war crimes as they expose hundreds of thousands of people to the risk of falling into poverty and famine and they undermine the measures taken by the Syrian state to alleviate the burdens of the aggressive war and the unjust embargo imposed on Syria by the West, led by the United States.