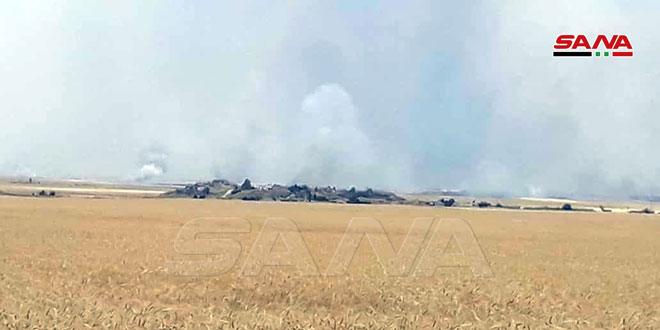 Hasaka, SANA- Mercenaries sponsored by Turkish Occupation resumed their crimes against locals and their properties, as they set fire to wide areas of farms in many villages in Tal-Tamer and Abu-Rasin in Hasaka countryside.

Local sources told SANA reporter in the region that “groups of the pro-Turkish mercenaries on Sunday morning, set fire to many wheat and barley fields in Al-Dawadiyah, Mulla Nuri, Al-Arisha, Al-Jameelia, and Abdul Salam and Al- Azeeziya villages in Tal-Tamer and Abu-Rasin in Hasaka countryside”.

The sources said that Syrian Arab Army units deployed near the area rushed to assist locals in putting out the fires.

According to locals of the mentioned villages, the reporter clarified that “fires spread quickly due to the winds and burned more than 20,000 dunums of wheat and barley fields which are still burning till now and spreading to burn more farms”.

SANA’s reporter in Hasaka said that Turkish occupation forces and their mercenaries raided houses in the village of Tal Helf in Ras al-Ayn countryside in Hasaka province, and set up roadblocks at its entrances.

The reporter said that the occupation forces and their mercenaries abducted more than 30 of the village’s residents and took them to an unknown destination.

2020-05-24
yara
Share
Previous SANA reporter: Turkish Occupation mercenaries set fire to wide areas of farms in many villages in Tal-Tamer and Abu-Rasin in Hasaka countryside
Next Tens of pro-Turkish mercenaries killed or injured due to infighting among them