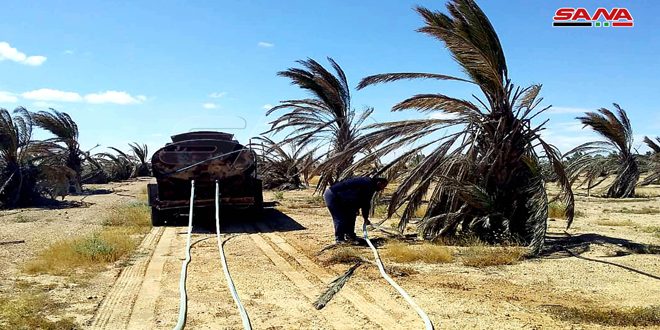 Palmyra, SANA- Agriculture Directorate in Homs began to rehabilitate nurseries of palm trees in Tadmour (Palmyra) and its Badiya (desert) after damage was caused to them over past years due to terrorist acts.

Speaking to SANA reporter, Director of palm trees nurseries Ahmad S’aoud Yousef pointed out to measures taken to save the remaining palm trees cultivated in those nurseries .

He also pointed out to the need for rehabilitating all the wells and irrigation networks which have been damaged due to terrorism for their function in providing water and irrigating.

He said that three palm nurseries were established in Palmyra and its desert in which about of 16,600 palm trees were planted in the nurseries, only 9,500 remain as a result of the terrorists before their retreating from the area.

New York, SANA-Syria’s permanent representative to the UN, Dr. Bashar al-Jaafari, affirmed that the US, …