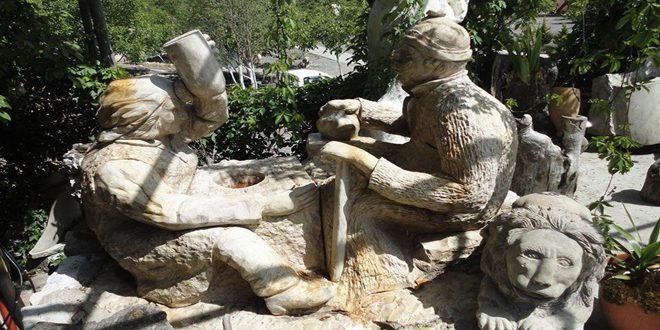 Damascus, SANA_ Art of sculptor to Zuhair Khalifa, is the art that immortalized the civilizational values which played a pivotal role in creating civilization and strengthening our motivation to continue in life and the ability to create new and lasting innovation. In brief, sculpture is the art of eternity.

Khalifa at the beginning went towards realism, so he monitored the rural environment on the Syrian coast and its heritage and its relationship with nature and the lives of peasants and ancient tools that they used within their lives.

He clarified that the heritage of the region is an extension of our Phoenician ancestry  and this is clear with the names of villages and archaeological finds. This region still gives birth to poets, artists and creators.

In the second stage of his journey with art, Khalifa developed his art by formation and experimentation in various art schools of fiction, realism, classicism and others, diversifying its materials which are used between stone, wood and clay because this region is rich of wood, stones and various materials to make him produce his art from this place.

Khalifa participated in the forum of “Palmyra, the gateway to the sun”, which was hosted by Tartous in response to the crimes of terrorism against the bride of the desert ” Palmyra”.

Through his work “Zanobia”, he has symbolized the Syrian woman and given her the features of beauty, and prestige in the royal attire. Every Syrian woman according to Khalifa, has a Zanobia inside her and inside every house and every wife, mother and sister’s martyr.

As for his work, Panorama of Eternity in Beit Yashout Township, it came from the inspiration of the terrorist war on Syria, which is a huge stone block weighing before work 35 tons of oil marble which was transported automatically and placed close to a stone wall, the sculpture is estimated at 12 tons after the completion of the work and collected in it between a martyr, wounded and a soldier carrying a child.

Khalifa is currently preparing to sculpt a site on a mountain across a wide area of about 3000 square meters that includes all his sculptures and needs a full day to visit as he put it.

He considers that there are shortcomings towards the true creators of cultural and media institutions because they work in the shadows and search for art and creativity without regard for fame.

Khalifa called for the development of a culture of artistic awareness in schools and giving more importance to art, drawing and music because it is only by art that the peoples rise.

The sculptor Khalifa participated in many exhibitions in most Syrian governorates and is currently preparing to participate in a new exhibition that carries new and different ideas.