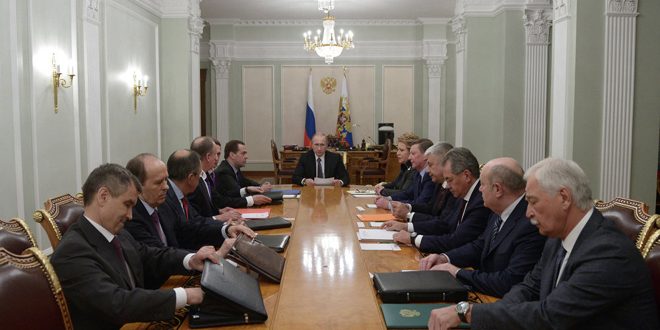 Moscow, SANA_ Russian President Vladimir Putin discussed with members of the Security Council of the Russian Federation (SCRF) the implementation of the cessation of hostilities agreement in Idleb.

Sputnik reported that Kremlin Spokesman Dmitry Peskov clarified, during a press conference, that the participants in the meeting on Friday discussed the implementation of the cessation of hostilities agreement in Idleb recently reached in Moscow.

On March 5, at the end of his talks with Turkish President Recep Tayyip Erdogan in Moscow, Putin announced that an agreement was reached to stop the hostilities in Idleb, noting that the agreement affirms commitment to Syria’s unity and sovereignty and the continuation of combating terrorism there.