Sabbagh: OPCW has to change its method, show neutrality, independence and objectivity 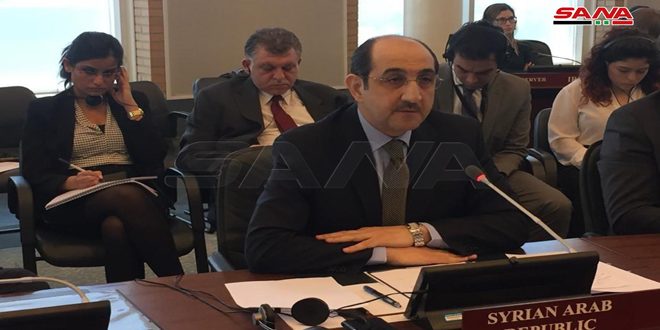 The Hague, SANA – Syria’s Permanent Representative to the Organization for the Prohibition of Chemical Weapons (OPCW), Bassam Sabbagh, underlined that the OPCW Technical Secretariat has to change its method, show neutrality, independence and objectivity in a way that return trust in its reports that will be later issued by its teams.

Sabbagh, in a speech at the 73rd session of the OPCW Executive Council being held in The Hague, indicated to a number of “leaks” regarding the report of the Fact-Finding Mission in Syria on the alleged incident of Douma as internal documents and letters that have been exchanged between the employees of the Technical Secretariat.

“Those documents reveal distortion of facts and manipulation of information,” Sabbagh said, warning against the danger of the serious distortion of Douma report and the volume of the foreign pressures put on the mission members.

Sabbagh went on to say that OPCW Technical Secretariat’s determination to escape from facing the truth, ignoring the distortion of facts, manipulating the information of the final report of the alleged incident of Douma, to which the US and some western states stand behind to justify their aggression on Syria, all that reflect abnormal and unprofessional state of work inside the Organization.

The Syrian diplomat reiterated Syria’s condemnation of using chemical weapons in any place and under any circumstances, saying that Syria warns against the escalation of international terrorism and the danger of terrorist organizations’ possession of toxic, chemical weapons.

“Syria is determined to offer the utmost forms of cooperation with the OPCW technical secretariat and it has welcomed the visits of the Organization’s teams to Syria,” Sabbagh said, stressing the need for considering measures that should be taken in evaluating the security situation in any region in Syria.

He renewed Syria’s commitment to carry out its obligations and to cooperate with the Technical secretariat away from preconditions, pressures, politicization or suspicion practiced by the US and its allies to affect the work of OPCW.