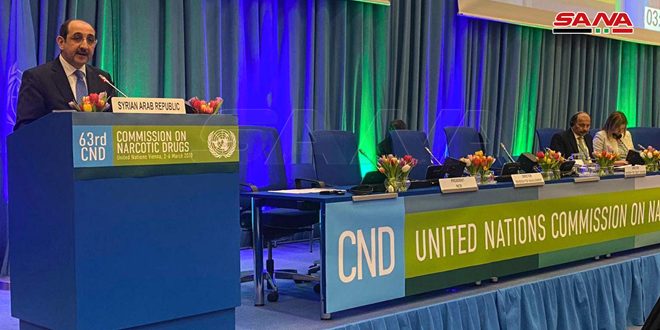 Vienna, SANA- Syrian Arab Republic stressed care, as a state part of most of international instruments related to drugs combating, smuggling and use for non-medical purposes, for updating and developing its national laws in a way that cope with these international agreements along with adopting measures that aim to prevent their transportation, smuggling and use for illegitimate purposes.

Syria’s Permanent Representative to the UN in Vienna Bassam Sabbagh said, in a statement in the 63rd session of the UN Commission on Narcotic Drugs (CND) is held in Vienna, Syria exerts tireless efforts to enhance collective awareness on the dangers of drugs, building the national potentials and raising their rehabilitation level in supporting the international efforts aim at limiting this global problem.

Sabbagh pointed out that Syria has suffered due to the drugs problem as a result of its geographical position which made it an obligatory passage for transit and smuggling of drugs between the countries of origin and destination.

He indicated that this problem has increased in the recent years as terrorist organizations which are supported by a number of countries have established control over some bordering areas as well as terrorist groups’ cross-border operations have created an appropriate environment for transporting, smuggling and trafficking drugs, and provided large financial returns that contributed to financing the terrorist groups.

He reiterated that some countries which are involved in bringing terrorists into Syria have used drugs as one of their terrorist tools through targeting spectrums of the Syrian community, particularly the youth to weaken and controlling them.

Sabbagh expressed deep concern over the ability of terrorist and criminal members to find new and various methods for smuggling the narcotic materials, through using modern sophisticated means and large financial returns resulted from illegitimate trafficking of drugs.

He called for the necessity of efficient international cooperation in facing this danger, including continued exchange of relevant information and carrying out combating efforts through providing technical capabilities, laboratory equipment and modern detecting systems to control the borders.

The main challenges that face Syria in the framework of its efforts to combating drugs is the coercive unilateral measures and different forms of siege imposed by some countries which hinder Syria’s efforts and prevent it from carrying out efficient procedures to combat drugs, he underlined.

Syria shares concern over some countries which legalize the use of cannabis for non-medical purposes in flagrant violation of the three international agreements on drugs and contradicted the collective efforts of the international community in implementation of the Political Declaration on drugs for 2009 and the outcomes of the UN General Assembly’s  Special Session on drugs in 2016, he went on to say.

Sabbagh called on the UN member-states to commit to the full implementation of the international agreements honestly and far from selectivity.
Hala Zain

drug Sabbagh session Syria 2020-03-03
hala
Share
Previous Military source: at 11:03 am on Tuesday, and while carrying out a mission against armed terrorist organizations in southern Idleb, a Syrian warplane was hit by a missile fired by Turkish regime’s air force as it was downed in the area, northwest of Ma’aret al-Nu’aman.
Next SANA reporter: Syrian army units down a drone for Turkish regime’s forces in the surroundings of Saraqeb