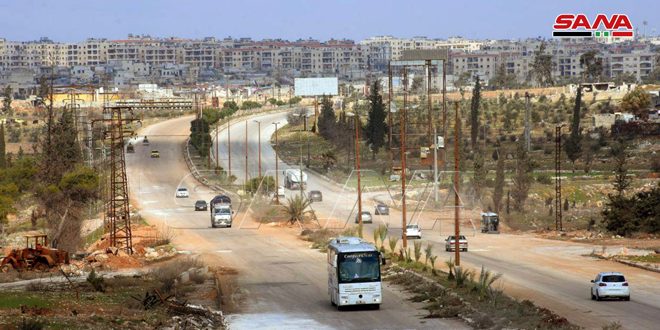 Aleppo, SANA_ The Ministry of Transport on Saturday announced that Damascus-Aleppo international highway was officially opened to traffic.

In a statement to reporters from Aleppo, Minister of Transport Ali Hammoud said that Damascus-Aleppo international highway is officially opened to traffic and it is at the full disposal of citizens.

He indicated that work began to rehabilitate the railway from Homs to Hama and then to Aleppo, which will be completed within the next few months.

Aleppo-Damascus international highway is considered an economic vital artery that links Aleppo province with other Syrian provinces as it is a fast road for the goods flow, transit trade, transporting passengers among big cities. The highway shortens time, reduces traffic congestion and accidents which repeatedly happen on the current road of Khanaser/Ethreya/Aleppo.

Earlier, the transport companies run their journeys from Damascus, Homs and Hama gradually to Aleppo city via the international highway after the Syrian Arab Army’s announcement that the highway is safe after the liberation of the areas surrounding it.