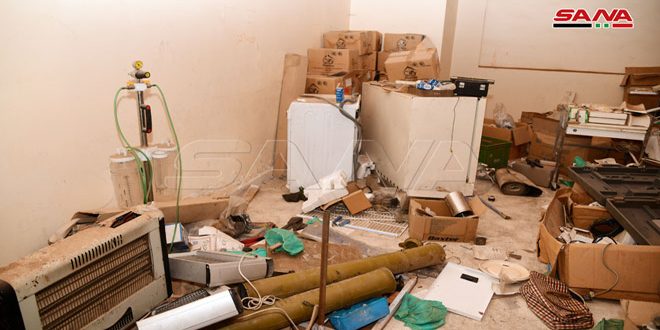 Aleppo, SANA- while completing the process of combing Hayyan town in Aleppo northwestern countryside, Syrian Arab Army units found a field hospital which contains medical devices and equipment, some of them were made in Saudi Arabia and Qatar.

SANA reporter said that while combing the neighborhoods and houses in Hayyan town which has been recently liberated from terrorism by the Syrian Arab Army, army units discovered a field hospital for terrorists within Ibn Hayyan private school.

The reporter added that the field hospital contains medical and emergency equipment, masks, clothes, filters, a number of beds and medicines, some of them were made in Saudi Arabia and Qatar, in addition to finding a number of cars that had been used by terrorists for transporting the wounded.

She indicated that TOW missiles and a launching pad were also found inside the field hospital.

The reporter added that Ibn Hayyan School had been transformed into field hospital by terrorists who came from different parts of the world to spread their dark mentality across Syria.