Lavrov: Triumph over terrorism in Idleb is inevitable 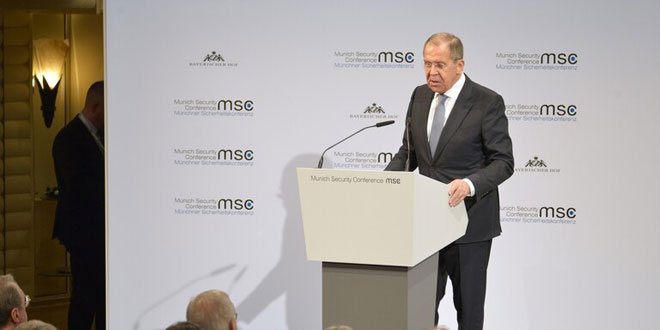 Munich, SANA – Russian Foreign Minister Sergey Lavrov said that the triumph over terrorism in Idleb is inevitable and a must.

During his speech at the 56th Munich Security Conference, Lavrov said that the Russian-Turkish agreements regarding the de-escalation zone in Idleb do not mean abandoning the relentless fight against terrorist organizations, reaffirming the importance of eliminating the armed organizations in the last hotbeds of terrorism, on top of them Jabhat al-Nusra that is being called today “Haiet Tahrir al-Cham.”

The Russian Minister said that the agreements about Idleb include many topics, but achieving them is complicated and this is due to terrorists’ use of the civilians as human shields.

On another note, Lavrov affirmed during a meeting with UN Special Envoy for Syria Geir Pedersen on the sideline of the conference the importance of respecting Syria’s sovereignty, independence, and territorial integrity, as well as the importance of combating terrorism in it.

The two sides discussed issues related to the progress of the political process and security issues, with emphasis on ensuring security and stability.

Later, Lavrov discussed with his Iranian counterpart Mohammad Javad Zarif the developments of the situation in Syria, in particular Idleb, with the two affirming the importance of reaching a political solution to the crisis.