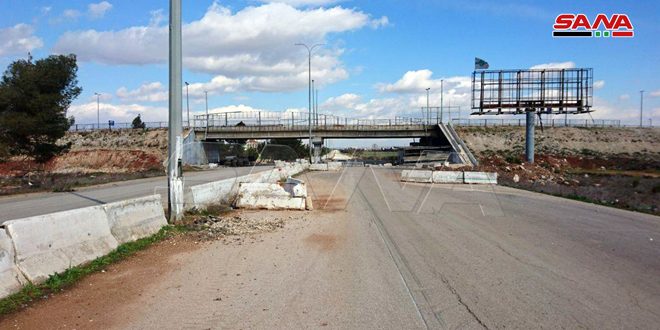 Aleppo, SANA- The Syrian Army units completed securing Damascus/ Aleppo international highway passing by Idleb and Hama after liberating the surrounding areas, defeating the terrorist groups from the two sides of the highway.

SANA reporter said that the Army units, after securing the eastern side of Damascus/Aleppo international highway, secured the two sides of the highway particularly the remaining area near Aleppo western entrance after liberating the surrounding areas and eliminating the last hotbeds of terrorists.

The reporter added that the Army units continued its operations against Jabhat al-Nusra terrorists and the terrorist groups affiliated to it on several directions towards Orum al-Sughra village to the west of the international highway targeting the terrorists’ bases and fortifications by different firearms.

The military operations resulted in defeating the terrorists from the village of Orum al-Sughra while the operations are still going on towards Orum al-Kubra and its surrounding.

At the same time, army units are working on combing al-Rashedin 4 of the remnants of the terrorists, explosives and the mines.

The Army units also uncovered a network of tunnels equipped by ventilation holes and fortifications for terrorists in addition to weapons and ammunitions such as rocket shells and various ammo.

They also dismantled a number of mines and explosive devices which were planted by the terrorists to hinder the advance of the army units.

On Thursday, the Army units liberated Kafr Joum village and Jameit al-Mohandisin 1 and 2 areas in Aleppo western countryside after fierce clashes with the terrorists of Jabhat al-Nusra and the groups affiliated to it.