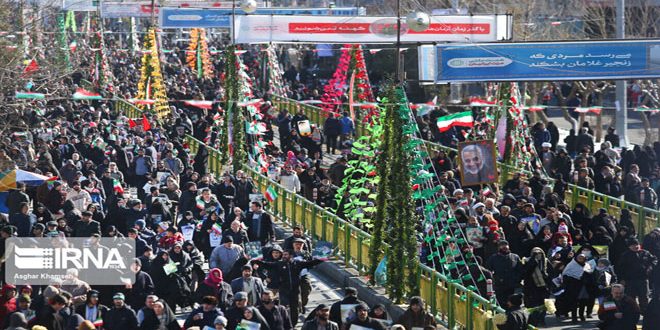 Damascus, SANA- Since the victory of the Islamic Revolution in 1979 under the leadership of the late Imam Ayatollah Khomeini, Iran has been achieving accelerating leaps towards building its comprehensive renaissance in different domains to become one of the most important states in the Middle East and the Islamic World, and a key player on the regional and international levels.

The Iranian people today are celebrating the 41st anniversary of the Islamic Revolution victory which has been a watershed which transformed Iran from a subordinate government to an independent state based on the principle of democracy and the respect of the states’ sovereignty, independence and territorial integrity. A state which calls for the Islamic unity and supports the Palestinian cause and the resistance, and stands against the hostile US and Israeli policies in the region.

Over the past four decades, Syria and Iran have maintained a solid, deep-rooted and strategic relation as it has been a main basis of Iran’s foreign policy of confronting all the Zionist and Western schemes which target the region and its security and stability.

The relation between Syria and Iran represents an uncompromised firm alliance, and it is related to the present of the region and its future as it is based on the determination of both sides to continue to develop the bilateral relations in a way that meets the interests of the two peoples in different domains, particularly in the political and economic ones.

Many agreements have been signed between Syria and Iran in the economic, educational and media fields as the two countries have been working in a systematic way to adopt economic policies that can stymie the U.S. economic measures imposed on them.

Throughout the terrorist war which has been waged against Syria from nine years, Iran has provided the support and help for Syria in many spheres with the aim of enhancing the steadfastness of the Syrian Government, people and army in the face of the Takfiri terrorist aggression as Iran has always affirmed Syria’s right in defending its sovereignty and territorial integrity at the international forums.

The Western pressures and the US economic measures regarding the Iranian nuclear file and Washington’s non-abidance by its obligations according to the agreement signed with the P5+1 in the year 2015, haven’t dissuaded the Iranian leadership and people from continuing to make qualitative achievements in the military, economic, scientific and medical domains as Iran has become on the top of the states in the world which has made significant achievements in the field of air, marine and land military industries, and it has been able to achieve self-sufficiency in manufacturing military and defense equipment.

Despite of the economic and political pressures imposed by Western states, Iran has been able to reach the highest levels at the economic classification through possessing an appropriate macroeconomic environment, and the availability of infrastructure, health conditions and appropriate education, in addition to enjoying important advantages and opportunities being the second largest economy in the Middle East region.

On anniversary of Islamic Revolution Victory…Iran continues to progress…A firm ally to Syria in face of aggression and terrorism 2020-02-11
ruaa-jazaeri
Share
Previous Terrorist attacks launched from Idleb unacceptable, should not continue, Kremlin says
Next Syria renews categorical rejection of any Turkish presence on its territories