Atrocities ignored by int’l community, US drones killed thousands in many countries 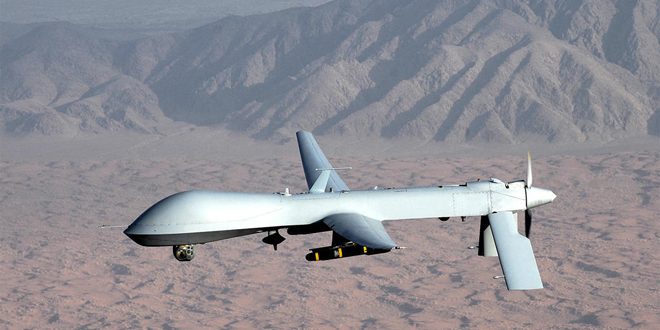 Damascus, SANA_ So many horrible crimes have been committed by the US army through conducting drone attacks in several countries including Afghanistan, Iraq and Somalia under the pretext of “fighting terrorism”.

Thousands of innocent civilians, including women and children were killed in these attacks under the silence of the international community which has been ignoring the savage massacres of the US army.

Brandon Bryant was a drone sensor operator in the US Air Force for six years. Bryant, who fired missiles remotely from small black room in district of Nevada, unveiled to the British newspaper, “The Sun” horrible details about the American army’s program in operating these drones in order to kill innocent people in several countries with complete disregard to their identities or ages.

Bryant, who later realized that the crimes he committed against civilians both in Afghanistan and Iraq, bombed between 2006 and 2011 more than 1,600 targets identified by those responsible for him in the US Air Force.

He later discovered that among those, who were killed as a result of the raids he launched from his small room using the drone that he is operating from thousands of miles away, are innocent children and women.

When he told those responsible for him that he realized that he killed a child in one of the raids launched in Afghanistan, they ridiculed him and then reprimanded him, according to Bryant.

The worst and most surprising situation for him was his colleagues’ attitudes who practice killing as if it was an electronic game paying no heed to the fact that they are killing children and women in other countries only to implement the orders.

The confessions of Bryant, who left the US military and gave testimony about the US aircraft program in front of the United Nations and other international organizations, is evidence on the United States’ disregard for the lives of civilians and innocent people in many countries where it interferes illegally under the pretext of combating terrorism.

The US drones that the Afghans call “the angels of death” participate in all the wars waged by Washington, which have killed hundreds of civilians in their countries, in Iraq, Somalia and Yemen, in complete secrecy so that the United States refuses to reveal the true number to its victims.

On March of last year, US President Donald Trump canceled a measure that obliges the US government to publish an annual report on the number of people killed as a result of raids by US drones or any other operations it classifies as “fighting-terrorism” outside the areas of war around the world.

Trump not only covered the results of the air strikes by using drones and the number of casualties, but also in 2017 changed the rules for targeting those suspects armed persons or terrorists which multiplied many times the risk of killing civilians with these attacks.

The crimes committed by the United States around the world are similar in their ugliness, but they differ in the way they are committed and vary between direct wars, as happened in the US invasion of Iraq and Afghanistan, or by using their agents of terrorists and mercenaries as happened in Syria or through the use of modern technology like drones, as in Somalia and Yemen.