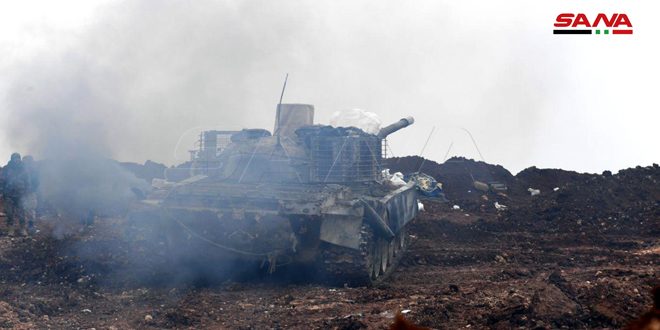 Aleppo, SANA- Units of the Syrian Arab Army on Thursday resumed their military operations to strike positions of terrorist organizations to the west and southwestern side of Aleppo, carrying out intensive artillery and rocket strikes against gatherings of Jabhat al-Nusra and its affiliated groups.

SANA reporter said that the army units advanced towards western Khan Touman axis to the south of Aleppo city and seized tunnels dug by terrorists under mountains in Talat al-Sakher region.

Many of the terrorists were killed, others were injured, and their weapons and ammo were destroyed in the army strikes.

Syrian Arab Army’s units tunnels 2020-01-30
admin
Share
Previous People’s Assembly rejects the US proclamation of the so-called “Deal of the Century”
Next Zakharova: Moscow committed to its obligations regarding Syria