Most prominent archaeological discoveries in Jableh city over past year 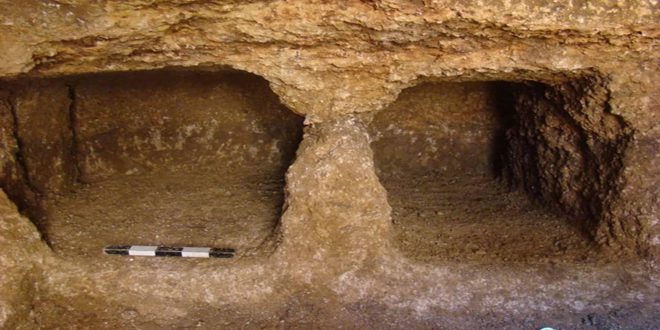 Lattakia, SANA_ The archaeological excavations in the region of Jableh discovered mass burials carved in rocks, funerary monuments and many finds and historical buildings dating back to different historical eras that highlight the importance of this region and its historical and cultural role.

Head of Department of Antiquities of Jableh, Masoud Badawi, told SANA recently that the excavations carried out last year in the northern side of the village of “Arab al-Malek” south of the Jableh, which was known during the second millennium BC as Paltus, uncovered mass graves carved in the rock dating back to the Roman era. In addition, pottery sarcophagi and saddles, containing Greek writings indicating the name of the saddle maker, “Theodorus”, were found.

Badawi indicated that in ” al-Fayd “area, located about 700 meters southwest of the old city of Jableh, five cemeteries were discovered on the northern rocky shelf of the estuary of the al-Fayd River.

A number of clay saddles dating back to the fifth and sixth centuries AD were also found.

Badawi pointed out that in the garden of the city council of Jableh, the excavations revealed many tombs dating back to the eighteenth century, in addition to pottery and stone channels heading from the eastern side of the ancient city of Jableh.

In “Ayn Salem” site, which is located near the village of Ayn Sharkia, a church was discovered, most of its parts made of mosaic and decorated with animal motifs that were called   “paintings of paradise or peace” because they contain pictures that gather between predatory and domestic animals, and many other paintings.