Army responds to terrorist attacks on Aleppo and Idleb, destroys their rocket launch-pads 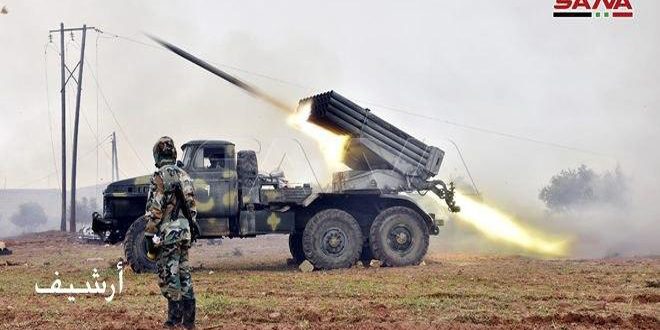 Aleppo, Idleb, SANA-Syrian Arab army units in Idelb countryside on Wednesday responded to terrorist attacks on safe regions, killing and injuring a number of them and destroying many rocket launch-pads.

SANA reporter said that the army units carried out concentrated strikes at the positions of terrorists affiliated to Jabhat al-Nusra organization on the outskirts of Ma’arat al-Numan and the villages of Ma’ar Shourin and Ma’asaran in Idleb countryside.

Ealier, the Army also responded to terrorists’ attacks on Aleppo City through carrying out artillery bombardments targeting their fortifications and shells’ launch pads in a number of villages and towns northwest of Aleppo city and in al-Rashideen area to the west.

SANA’s reporter in Aleppo said that army units destroyed terrorists’ rocket launch pads and mortar launchers after carrying out artillery bombardments against their fortifications and strongholds in the villages and towns in Kafr Hamra, Anadan and Haritan and to the northwest of Aleppo city.

He added that the army bombardments targeted terrorists’ hideouts in al-Rashideen area on the western outskirts of the city, destroying their launch pads and fortifications from which they target the city.