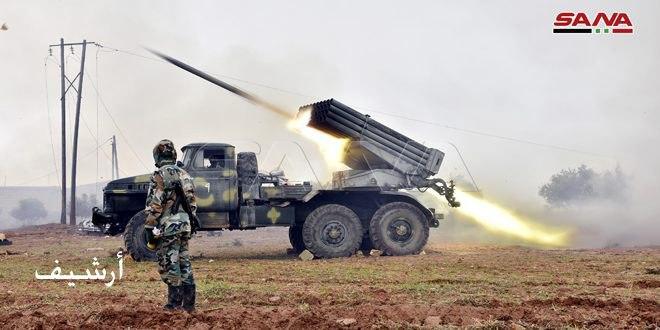 Idleb, SANA- Syrian Arab Army units on Wednesday foiled an attack by Jabhat al-Nusra terrorist organization and other affiliated terrorist groups on military posts in Idleb southeastern countryside and crushed them from the villages of Tal Khatra, Abu Jarif and Kherbet Dawoud.

SANA reporter quoted field sources as saying that the terrorists of Jabhat al-Nusra and the Turkistani Party launched attacks against army posts, asserting that the army thwarted the terrorists’ attacks and targeted convoys of their vehicles, inflicting heavy losses upon them in personnel and equipment.

The reporter pointed out that army units carried out a military operation in response to the terrorist attack crushing terrorists from the villages of Tal Khatra, Abu Jarif and Kherbet Dawoud.