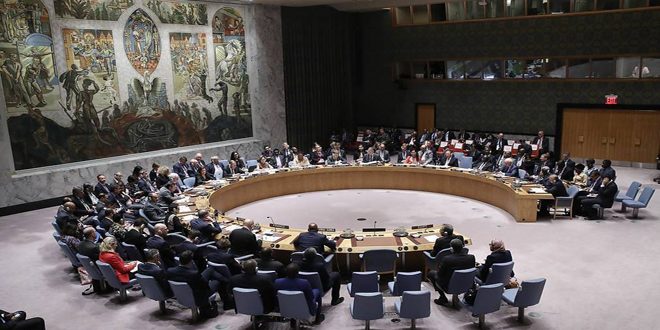 New York, SANA- Russian Permanent Mission to the UN announced that the UN Security Council will discuss on January 20th the report prepared by the Organization for the Prohibition of Chemical Weapons (OPCW) on the alleged chemical attack on Douma in April 2018.

Tass news agency quoted spokesman for the Russian Permanent Mission to the UN Fyodor Strzhizhovsky on Monday as saying that “Russia has put forward an initiative to convoke an Arria-Formula meeting of the UN Security Council members to discuss the situation surrounding the OPCW report.”

“The meeting will focus on the investigation into this incident by the OPCW fact-finding mission. The session is scheduled for the afternoon of January 20,” Strzhizhovsky said

Last December, WikiLeaks website unveiled new evidence on the OPCW manipulation in the final report on the alleged chemical attack in Douma through publishing 4 documents that reveal that specialist in toxicology have ruled out that the deaths were due to the exposure to chlorine.

The WikiLeaks published another document based on emails exchanged among OPCW members which uncovered that the Organization’s senior official Sebastian Praha ordered to withdraw the report which shows contradicted results on the alleged chemical attack from the archive of the organization and to delete all its effects.

Last March, Russian Foreign Ministry affirmed that the OPCW ignorance of all the information presented by Russia and Syria on the fabrication of using chemical weapons in Douma raises concerns and aims at justifying the US-British-French tripartite aggression on Syria.