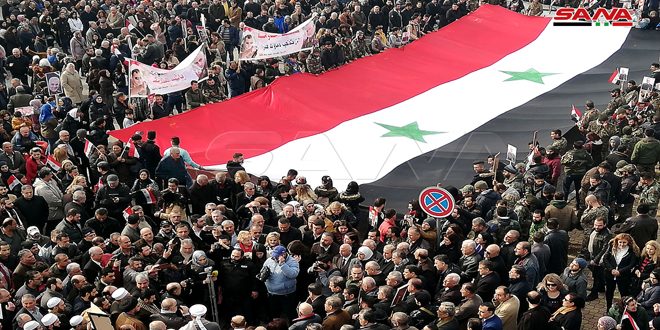 Lattakia, SANA- A large number of people gathered at al-Muhafaza Square in Lattakia on Thursday to express condemnation of the U.S. criminal aggression near Baghdad airport which led to the martyrdom of leader of al-Quds Failaq Lt. General Qassem Soleimani, Deputy Chairman of Iraqi Popular Mobilization Commission Abu Mahdi al-Muhandis and a number of their companions.

In a speech during the gathering in which popular and official figures participated, Chairman of Lattakia Awqaf “Islamic Endowments” Department Sheikh Mohammad Alio affirmed that this stand is a token of loyalty to the martyrs whose sacrifices have significantly contributed to defeating the Zionist-U.S. project in the region and to eliminating terrorist organizations in Syria and Iraq.

Alio saluted the Syrian Arab Army and the countries of the resistance axis who have sacrificed to achieve that victory.

They added that martyr Lt. General Qassem Soleimani and his resistant companions have struggled in the Arab arena and they have contributed to foiling the U.S. project of hegemony.

The strongly condemned the crime of assassinating the elite men of resistance which violated all the international laws, adding that this crime entails a response that would lead to ending the U.S. presence in the region.

They noted that this crime came in an attempt to revive the terrorist organizations which have been defeated and to raise their morale, affirming the necessity to continue the war against the criminal gangs till eliminating them completely.