Speaker Sabbagh , a number of Ministers offer condolences on martyrdom of al-Muhandis at Embassy of Iraq in Damascus 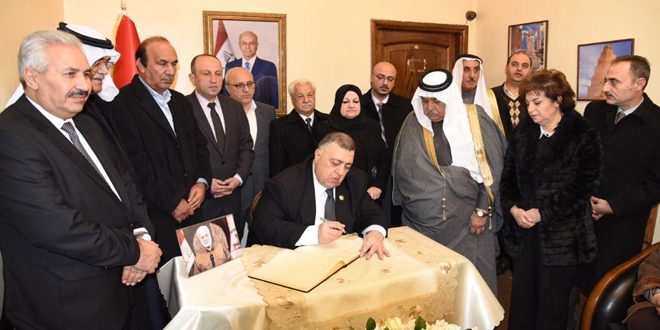 Damascus, SANA- Embassy of Iraq in Damascus held on Wednesday a condolence tent on the martyrdom of Deputy chairman of Iraqi Popular Mobilization Committee Abu Mahdi al-Muhandis and a number of comrades who were killed in a US attack near Bagdad International Airport.

Speaker of the People’s Assembly Hammoudah Sabbagh, a number of MPs, Interior Minister Mohammad Rahmoun, Education Minister Imad al-Azab, a number of the Syrian Arab Army officers, in addition to a number of ambassadors accredited in Damascus and religious figures were among those who offered condolences.