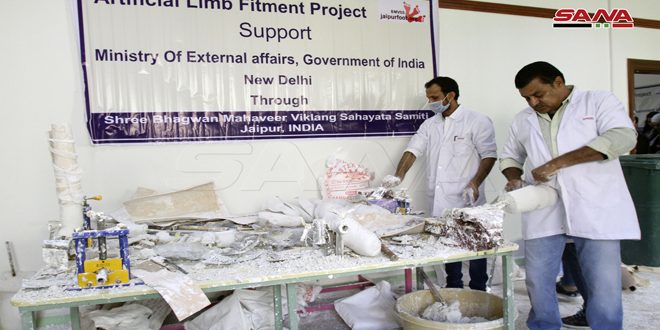 Damascus, SANA_ Within the framework of the friendship and cooperation relations between Syria and India, the humanitarian Indian initiative has performed the fitment of 130 artificial limbs for those who were wounded in the war and for people with special needs.

The initiative started last December 25 and will last for 45 days. 500 artificial limbs in various Syrian governorates have been fitted.

According to the initiative, an Indian medical team will supervise the fitment of the artificial limbs in coordination with the ministries of health and social affairs.

Minister of Social Affairs Reema Qaderi said that the government supported this initiative as an additional step to further consolidate cooperation with the Indian side, especially in the humanitarian field.

She added that the project will positively reflect on the beneficiaries and they will be able to practice their normal life once again.

Indian ambassador in Damascus Hifzur Rahman said that the initiative coincided with the 150th birth anniversary of Mahatma Ghandi, the symbol of humanity and peace in the world.

He added that the initiative reflects the deeply-rooted friendship and cooperation relations linking the two states.

The Ambassador expressed his country’s support for Syria and its war against terrorism.