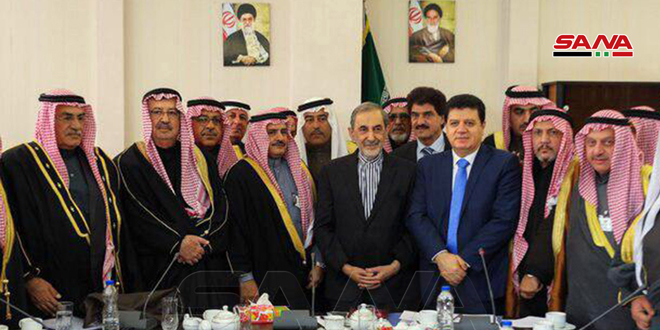 Tehran, SANA- Iranian Supreme Leader’s Top Adviser for International Affairs, Ali Akbar Velayati has renewed his country’s stance in rejection of the foreign interference in Syria and the region, affirming that the presence of U.S. occupation troops is illegitimate and contradicts with the international laws.

Velayati’s remarks came during a meeting with a delegation of heads of Syrian clans on Saturday.

He added that Iran opposes the foreign interference and it stands in the face of the conspiracies and schemes of dividing the states of the region.

Velayati expressed Iran’s rejection of establishing the so-called “Safe Zone” in Syria, indicating that it contradicts with the interests of the Syrian people.

He described the presence of the U.S. occupation troops in Syria and the stealing of its oil as a “”piracy which is inconsistent with international laws,” stressing the need to stand in the face of this blatant attack which aims to steal the wealth of the peoples of the region.

Commenting on the strategic relations between Syria and Iran, Velayati said “Our destiny entails from us not to keep silent when a regional country is attacked through the cooperation with each other and the confrontation of that attack,” stressing the necessity of liberating the occupied Palestinian territories from the Zionist entity.

Heads of the Syrian clans, for their part, affirmed that the U.S.-Zionist conspiracy which is financed by the Saudi regime has tried to target Syria, yet thanks to the steadfastness of its people, army and leadership and through the constant coordination with the Islamic Republic of Iran and the allies, Syria has been able to remain steadfast in the face of the crisis.

The delegation referred to the distinguished historical relations binding Syria and Iran, highly appreciating the Iranian leadership, government and people for their standing by Syria in the face of the terrorist war waged against it.

In a similar meeting with the delegation, Speaker of the Iranian Shura Council Ali Larijani reaffirmed his country’s standing by Syria, expressing its desire to effectively contribute to the reconstruction in Syria.

“Mr. President Bashar al-Assad has proven throughout the crisis that he is a resistant and wise leader,” Larijani said adding that “The Syrian people are a great and the Syrian army has been distinguished with its performance and high efficiency and has been able to fight terrorism which has been supported by America and (Israel) and some European countries and with all regret some Arab countries, and has win over all the conspiracies.”

Larijani underlined the necessity to liberate Idleb city from terrorism, referring to the positive role of Astana meetings in solving the crisis in Syria.

He asserted that the Syrian constitution is “written by the Syrian themselves without any foreign interference.”

Regarding the Israeli acts of aggression against Syria, Larijani said “They prove the anger of the occupation due to the victories achieved over terrorism by the Syrian Arab Army backed by its allies and the resistance axis.”

Members of the delegation, for their part, underlined the necessity of the continued coordination between the two countries for contributing to the reconstruction in Syria, particularly in the areas which had been liberated from terrorism completely.