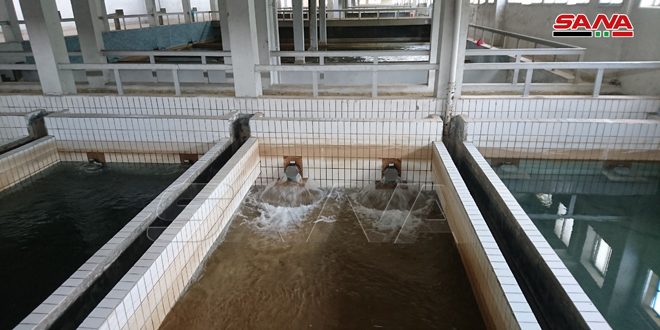 Aleppo, SANA- Establishment of Drinking Water and Sewerage of Aleppo has implemented many projects to provide drinking water to citizens since declaring Aleppo city free of terrorism three years ago.

Speaking to SANA reporter , Head of Aleppo Drinking Water and Sewerage Establishment Yusef Kurdiyah said that after liberation Aleppo from terrorism, rehabilitation of damaged water projects and facilities due to terrorism started where al-Khafseh water stations were rehabilitated and another fourth station was added to them with a capacity of 100,000 cubic meters per day at a cost of more than SYP 4 billion. 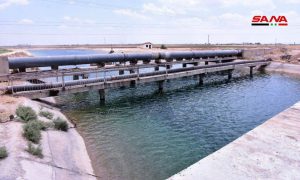 He added that the rehabilitation work extended to all parts of Aleppo eastern countryside as the water pumping plant of Maskana Sharq and Maskana Gharb was rehabilitated and nearly 40 villages were supplied with water with a cost estimated at SYP 920 million.

In Aleppo northern countryside, water networks were rehabilitated in Tal Raf’at , Mayer, Deir Jamal and the terrorism- affected villages at a cost of SYP 600 million, according to Kurdiyah,

He added that water networks and water pumping systems were also rehabilitated in the southern countryside.

The quantity of water pumped to Aleppo amount to 550 thousand cubic meters per day , he clarified.