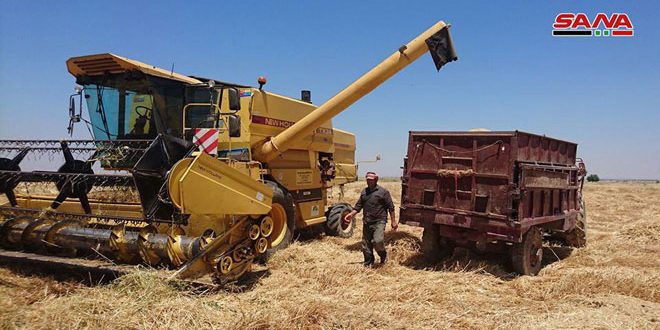 Aleppo, SANA- The agricultural sector in Aleppo province has been recovering gradually after it had gone through a huge damage due to terrorism as large areas of lands stopped production due to the sabotage inflicted on the water dragging networks and the irrigation channels, particularly in the eastern countryside of the province, in addition to the displacement of the peasants.

Since restoring security and stability to Aleppo province by the Syrian Arab Army three years ago, agricultural, which is a basic and vital element in the national economy, has started to recover gradually as the liberated areas of agricultural lands have been invested again and the irrigation systems have been rehabilitated.

The farmers in the liberated areas have also resumed work at their farms after providing the requirements of production for them.

The cultivated areas according to the plan of the Agriculture Directorate for the current season have exceeded one million hectares as they have been planted with all crops such as wheat, barely, cotton, winter crops and vegetables, in addition to the fruitful trees, the most important of which olive trees, Nabih Murad, Head of Aleppo Agriculture Directorate told SANA.

Murad added that the number of olive trees in the province hit 23 million trees, indicating that a number of olive pressers have been put into service again after rehabilitating them.

He asserted the importance of providing the necessities of the production such as the fertilizers and seeds for the peasants to push the agricultural sector in the province forwards.

Technical guidelines related to the plant and animal sectors are provided for peasants in the province by 27 agricultural guidance centers out of 104 centers which have been rehabilitated after restoring security and stability to the province.

The plan of Aleppo Agriculture Directorate for the current year included the production of 300 thousand saplings and it has been fully implemented.

On Dec. 22nd in 2016, Aleppo province was liberated from terrorism by the Syrian Arab Army and its liberation was a significant step for foiling the project which had been plotted and implemented by regional and Gulf regimes which serve the interests of the Zionist entity and the U.S. schemes which aim to divide the region and to consolidate mechanisms for looting it through the conflicts and the hostile wars waged on its behalf by the terrorist organizations which it has supported with money, weapons and mercenaries.