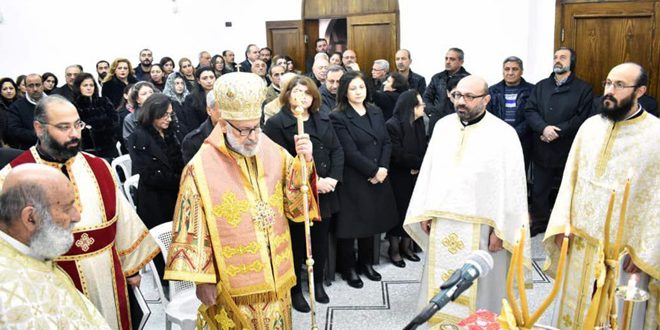 The mass, which was held in a hall belonging to the church, was presided by the Patriarchal Assistant of the Greek Orthodox Patriarchate of Antioch and All East, Bishop Lucas al-Khouri.

Patriarchal Assistant of the Greek Orthodox Patriarchate of Antioch and All East, Bishop John Batash, in a statement to SANA, expressed the great joy for holding the first mass in this church after liberating the city of Arbin from terrorism.

“The Syrians are determined to return to their cities to rebuild them,” Batash said, hailing the victories of the Syrian army in defense of the homeland.

A number of Arbin’s residents voiced their joy for holding the first mass in it, as Christmas and New Year approached, and after the return of security and stability to their cities thanks to sacrifices of the Syrian army.

Prayers and masses will be held in the hall next to the church until the completion of the works of restoration of the church.

The Syrian Arab Army had restored security and stability to Arbin city in March 2018.