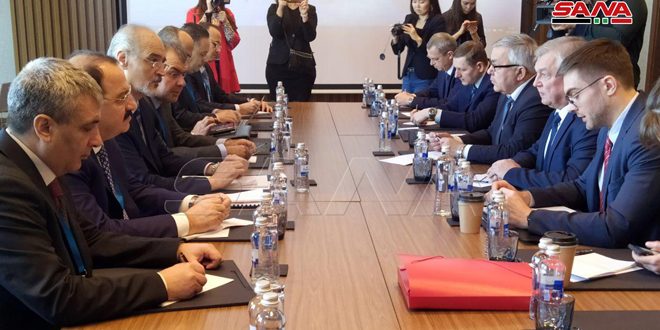 Nur-Sultan, SANA- Delegation of the Syrian Arab Republic, headed by Dr. Bashar al-Jaafari, on Tuesday held a meeting with the Russian delegation, headed by the Russian President’s Special Envoy for Syria Alexander Lavrentiev within framework of the 14th round of Astana talks on Syria.

Both sides reviewed the agenda of the current Astana round.

They agreed to continue the intensive consultations between them to come out with best results in light of the emerging conditions in a way that achieves the interests of the Syrian people in preserving Syria’s unity, sovereignty and territorial integrity.

Earlier, the fourteenth round of Astana talks on Syria kicked off in the Kazakh capital, Nur Sultan, with the participation of the Syrian Arab Republic delegation headed by al-Jaafari and other delegations.

UN delegation headed by UN Special Envoy for Syria Geir Pedersen is participating as an observer.

Since the beginning of 2017, 13 meetings in Astana format have been held, one of them was held in the Russian city of Sochi.

All of the meetings affirmed firm adherence to preserving Syria’s sovereignty, independence and territorial integrity and to continue war against terrorist organizations in the country till completely eradicating them.

Earlier, the Russian and Iranian delegations started their bilateral consultations within the framework of Astana 14th round.

On Monday, the Kazakh Foreign Ministry spokesperson Aibek Smadiyarov announced that all sides to the Astana process on Syria will be participating in the 14th round of talks on December 10-11 in Nur-Sultan.

He said the delegations of the guarantor states (Russia, Iran, and Turkey) will participate in the talks along with the delegation of the Syrian government and representatives of the “opposition.”

Smadiyarov added that the UN delegation headed by UN Special Envoy for Syria Geir Pedersen will participate as an observer.

Representatives from Jordan, Lebanon and Iraq are also participating as observers, according to the Kazakh diplomat.

On November 25, Smadiyarov said the agenda of the next round of Astana talks on Syria will involve bolstering the political process.

He added, in a statement to journalists, that the agenda will include issues related to promoting the political process in light of the launch of the committee for discussing the constitution and the situation on the ground in Syria, with emphasis on the situation in the Syrian al-Jazira area and Idleb province.