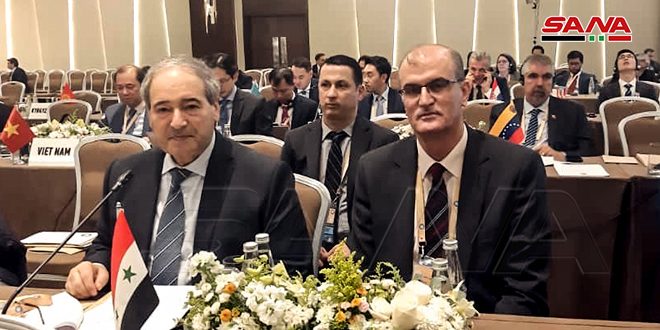 Baku, SANA- The Preparatory Ministerial Meeting of the Non-Aligned Movement (NAM) countries kicked off on Wednesday in the Azerbaijani capital, Baku with participation of Syria.

The ministerial meeting of the NAM countries comes in preparation for the 18th Summit of the Heads of States and Governments of the NAM member-states to be held in Baku on Oct. 25-26.

Syria participates in the ministerial meeting with a delegation headed by Deputy Foreign and Expatriates Minister Fayssal Mikdad, and the membership of Director of the department of International organizations and conferences Abdel Moneim Annan.

Venezuelan Foreign Affairs Minister Jorge Arreaza handed over the chairmanship of NAM to Azerbaijani Foreign Minister Elmar Mammadyarov ,with the two sides stressing the importance of adhering to Bandung principles .