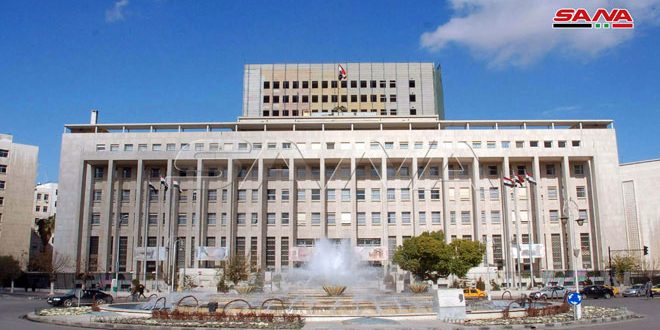 Damascus, SANA_ The Central Bank of Syria (CBS) announced the start of implementation of  “My currency is my power” initiative in coordination with the Damascus Chamber of Commerce.

The initiative is launched through the intervention of the businessmen who put a special account for the Chamber of Commerce in order to reduce the exchange rate of foreign currencies against the Syrian pound in the parallel market as of today after the completion of executive procedures in Syrian Commercial Bank.

In a statement  of which SANA received a copy, the Central Bank stated that the contribution of businessmen in the foreign exchange market is an “important initiative” that will improve the exchange rate of the Syrian pound in the parallel market against foreign currencies and control fluctuations of supply and demand for foreign exchange.

This initiative is added to the intensified efforts exerted by the Bank through financing imports.

The Central Bank said that Damascus Chamber of Commerce has already confirmed its commitment to the daily announcement of the foreign exchange rate in the parallel market, which reflects the reality of supply and demand operations on foreign exchange thus cancelling any role of speculation operations and the effects of social networking sites that operate from outside Syria.

The Central Bank stressed that it is precisely following up the financing of imports of the main commodities through public banks which are licensed to deal in foreign exchange.

The Central Bank reiterated that the intervention in the parallel market according to the initiative is exclusively through foreign exchange deposited by businessmen in the aforementioned account in the Syrian Commercial Bank.

In a statement to SANA, Director of Economic Research at the Central Bank, Ghaith Ali refuted as “baseless” what is circulated in some newspapers and social networking sites about the intervention of the Central Bank in the foreign currency market.

Ali clarified that this circulation is a “distortion of the content of the national initiative by the business sector and abuse of the role of the Central Bank of Syria in the success of this initiative and control the foreign exchange market”.

"My currency is my power" CBS initiative 2019-10-15
ghossoun
Share
Previous Syria participates in 141st General  Assembly of IPU  in Serbia
Next FT: UK to review all arms export licenses to Turkish regime