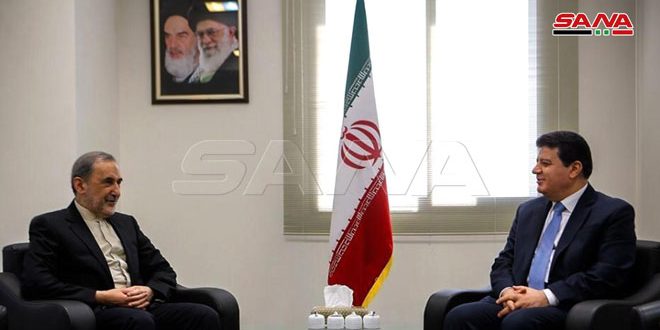 Tehran, SANA-Iranian Supreme Leader’s Top Adviser for International Affairs, Ali Akbar Velayati affirmed the necessity of stopping the offensive launched by the Turkish regime on the Syrian territories, reiterating his country rejection of the interference in the country’s internal affairs.

Meeting Syria’s Ambassador to Iran Dr. Adnan Mahmoud in Tehran on Saturday, Velayati reaffirmed his country’s full support to Syria’s sovereignty and territorial integrity, calling for the withdrawal of the Turkish forces and all the illegitimate foreign troops from Syria.

“The principle policy of Iran is based on supporting the people and government in Syria and defending their righteous stances in a way that entails continuing the joint cooperation till eliminating terrorism and the terrorist organizations completely,” Velayati said.

He hailed Syria’s leading role at the resistance axis, expressing confidence that Syria is able to face the threats more than ever.

Talks during the meeting dealt with the latest developments in Syria in light of the continued Turkish aggression on the Syrian territory.

Ambassador Mahmoud, for his part, asserted that the Turkish offensive reflects the expansionist ambitions of Recep Tayyip Erdogan’s regime.

He underlined the importance of the consultation and coordination between Syria, Iran and the allied sates to undermine the scheme which threatens Syria’s unity and sovereignty and the security and stability of the region as a whole.