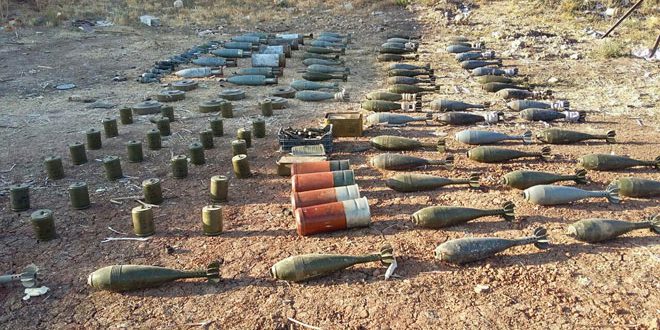 Hama, SANA- Authorities on Thursday found weapons and anti-tank and anti-personnel mines in the farms of al-Arba’ain village while combing the villages and towns liberated from terrorists by the Syrian Arab army in Hama northern countryside.

SANA’s reporter said that while the combing the villages and towns which were liberated from terrorism, the competent authorities found an amount of weapons, ammunition and various types of shells left behind by terrorists in the farms of al-Arba’ain village in Hama northern countryside.

2019-09-26
ruaa-jazaeri
Share
Previous A man injured in a mine blast in Damascus Countryside
Next Weapons, telecommunication devices left behind terrorists found in Daraa countryside