Cuban journalists express support to Syria in its war against terrorism 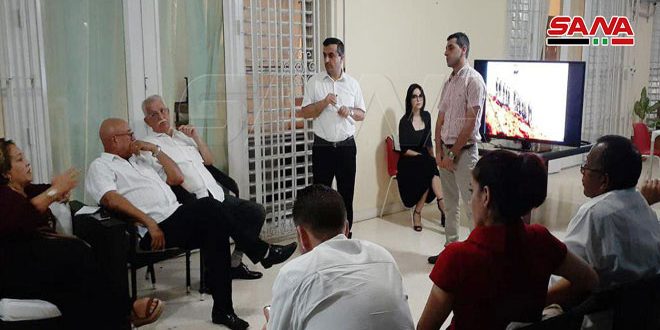 During a meeting with Syria’s Ambassador to Cuba Dr. Idris Mayya, the Cuban journalists affirmed that Syria’s triumph in its war against terrorism is a victory for all the honorable people across the world.

They referred to what has been achieved in Syria thanks to the sacrifices and heroism of the Syrian Arab Army in the face of the terrorist organizations.

For his part, Ambassador Mayya affirmed that the Syrian leadership, army and people will continue to hunt down the remnants of terrorists across Syria till eliminating them.

Ambassador Mayya presented a number of photos and videos showing some of the practices and violations committed by the authorities of the Turkish regime in Syrian areas and lands which they occupy.

He indicated that these practices expose the real intentions of the Turkish regime and its dirty role since the beginning of the terrorist war on Syria as well as its support to the terrorist organizations.