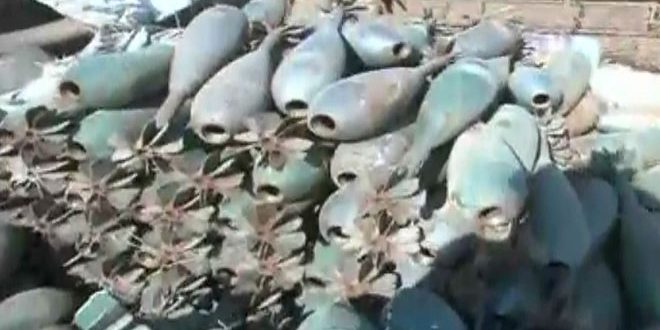 Hama, SANA- Competent authorities, in cooperation with the Syrian Arab army units, found rockets, ammunitions and shells left behind by terrorists in the farms of al-Zakat village  in the northern countryside of Hama.

A source told SANA reporter on Saturday that during combing operations in the liberated villages, in cooperation with units of the Syrian Arab army, amounts of weapons, various types of ammunitions and rockets left behind by terrorists were seized in the farms of al-Zakat village in Hama northern countryside.

The source added that the weapons included a number of landmines, 14,5 mm machine-gun rounds, rockets, tank shells, RPG rounds and tens of locally-made mortar shells, and a vehicle, in addition to many documents related to the terrorists of the “White Helmets” terrorist group.