French tourists from Palmyra: What enemies of culture have done unforgivable crime 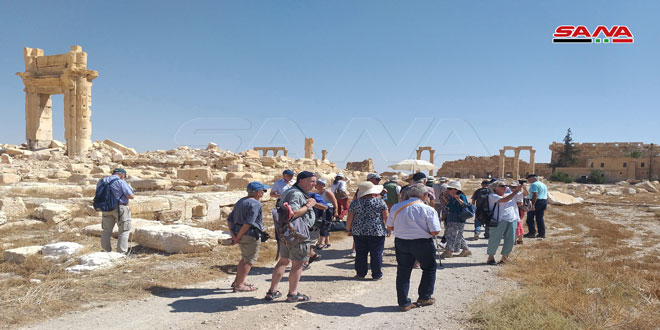 Palmyra, SANA_ Members of a French tourist group have described the ancient city of Palmyra as an open museum, expressing their pain and sorrow for the destruction of some of these historic landmarks by  the terrorists, the enemies of civilization and humanity.

That came during their recent visit to the city to brief  on the most of the city’s archaeological landmarks, especially those which were devastated by the systematic attacks of  “Daesh” terrorist organization before it was defeated from the area by the Syrian Arab Army.

SANA reporter in Palmyra pointed out that the French group members, which comprises 27 tourists,  toured the archaeological city and were amazed at what they saw of antiques of the ancient civilization of Palmyra and its importance on the Silk Road.

At the same time, they expressed their sadness over the devastation of some of the city’s archaeological sites by Daesh terrorists.

The French tourists considered that what the enemies of culture and enlightenment have done by sabotaging the most important monuments of the city is an unforgivable crime and a deliberate attempt to obliterate the historic face of the city.”

They hoped that archaeologists and organizations specialized in human heritage will rebuild and restore this civilized edifice as soon as possible with the help of the relevant international organizations, praising the richness of Syria’s civilization and cultural diversity.