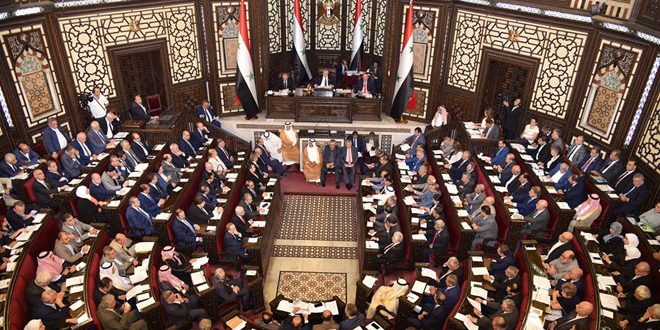 Damascus, SANA- The People’s Assembly on Sunday held the first session of the 11th regular  round of the 2nd legislative term chaired by Speaker Hammoudeh Sabbagh and attended by Prime Minister Imad Khamis and a number of Ministers.

Opening the session, Sabbagh affirmed in a speech that what is required during the current round is to be distinguished from the previous ones in the quality of the performance and he hoped that the previous period has provided an opportunity for the MPs to inspect the situations of the citizens and their demands for achieving a better performance.

“We pledge to make our work up to the great performance of our heroic army…Although it is difficult to reach the stage of that performance, yet we have to get close to it,” Sabbagh said.

He affirmed the common goals between the Government and the People’s Assembly in a way that achieves a strong integration between the legislative and the executive authorities to serve the homeland and the citizens, adding that this integration is necessary for enhancing their performance.

Sabbagh added the qualitative achievements gained by the Syrian Arab  Army on the track of the war against terrorism through liberating areas in the countryside of Hama and Idleb “dealt a strong blow to the ottomans who have hindered all agreements and continued their obstinacy and occupation.”

At the conclusion of his speech, Sabbagh highly appreciated the sacrifices of the Syrian Army personnel.