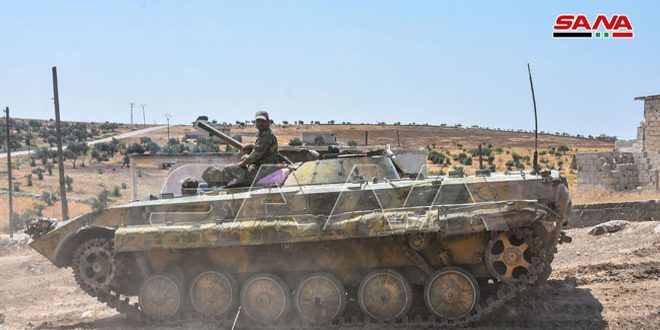 Idleb, SANA – Syrian Arab Army units on Saturday continued operations against the gatherings and positions of terrorist organizations in Idleb’s southern countryside, expanding the area under their control in the surroundings of Khan Sheikhoun city after inflicting losses in personnel and equipment upon terrorists.

SANA’s reporter said that over the past two days, army units have been engaged in violent clashes with terrorists from Jabhat al-Nusra in the direction of Madaya village northwest of Khan Sheikhoun in Idleb’s southern countryside after establishing control over the villages of Abdin, Khirbet Abdin and Um Zaitoun west of the city.

The reporter said the clashes resulted in killing and injuring a number of terrorists, while other terrorists flood north.

In the surroundings of al-Tamania village, army units carried out artillery and rocket strikes targeting terrorists’ fortified positions and supply routes, which resulted in killing a number of terrorists and destroying their vehicles and equipment.