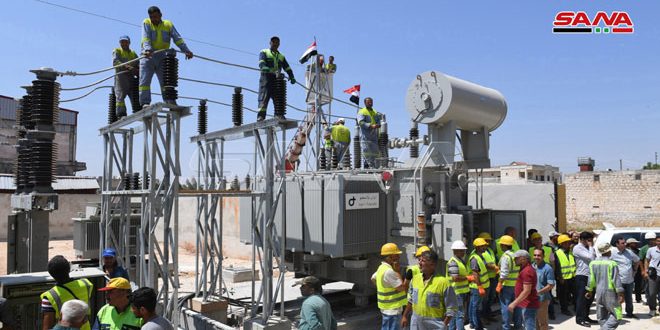 Aleppo, SANA- The number of projects which have been implemented since the liberation of Aleppo city’s neighborhoods and it countryside from terrorism reached 1216 projects, including power, water and drainage networks, schools, health centers , bakeries, and irrigation projects as part of government measures to rehabilitate infrastructures and services in the province.

A total of 247 additional projects were implemented in coordination with organizations, including schools , health centers, water drainage projects, solar lighting posts according to a report of the committee tasked with following up service and development projects in Aleppo province.

A bout 565 facilities entered the production stage in al-Sheikh Najjar industrial city, in addition to 112 projects including rehabilitation infrastructure of the water, electricity, drainage in the industrial city.

The committee’s report indicated that 76 public and private bakeries have been put in service, and 48 fuel stations have been activated in Aleppo city and its countryside , in addition to rehabilitating 130 schools in the liberated neighborhoods in the city , and 340 schools in its countryside.