President Lukashenko receives al-Moallem, stresses support to Syria in the war against terrorism 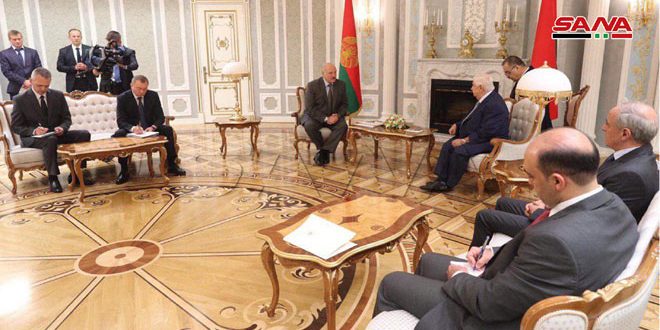 During the meeting, the two sides discussed bilateral relations and prospects of boosting cooperation, mutual consultation and exchanging visits in the interests of both countries, in addition to the latest developments in Syria and the region. 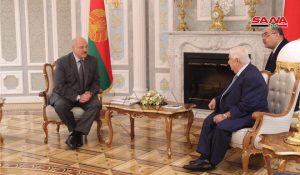 Al-Moallem conveyed President Bashar al-Assad’s greetings and best wishes to the Belarusian President, his appreciation and the appreciation of Syrian people for the principled stances of Belarus in support of Syria in the face of the terrorist war being waged on it.

Al-Moallem briefed the President on the latest situation in Syria and its war on terrorism. He affirmed that Syria is determined to combating terrorism which poses threat to the region and the whole world with all its forms, including the economic terrorism practiced by the US and its allies through blockade and the economic coercive measures imposed on Syria, until liberating the last span of the Syrian territory and restore security and stability to all Syrian geography.

He pointed out to Syria’s willingness to upgrade bilateral relations, particularly in the economic field, welcoming Belarus participation in the reconstruction process and Syria’s readiness to offer all facilitations to the Belarusian companies.

President Lukashenko, for his part, stressed that his country supports Syria and stands by it in the face of the terrorist attack to which it is exposed, and Belarus’ appreciation for the policy adopted by Syria, pointing out to the importance of cooperating with Syria against terrorism.

He said that the program adopted by Belarus to host hundreds of Syrian children of sons of the martyrs comes as an expression of appreciation for the sacrifices of their fathers in the face of terrorism and the just efforts Syria is exerting in defense of its right, its sovereignty and the Syrian people.

The President added that his country is ready to help the Syrian people rebuild their state. 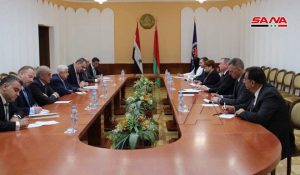 President Lukashenko asked al-Moallem to convey his greetings to President al-Assad, appreciating the principled stances of the Syrian leadership.

An official session of talks was held at the Belarusian Foreign Ministry HQ that included a meeting between al-Moallem and his Belarus counterpart Vladimir Makei during which the two sides reviewed bilateral relations and means of boosting them to the aspired-for level.

Al-Maollem described relations between the two friendly states as deep, pointing out to the need for enhancing them in all domains, particularly in economy and activating the meetings of Syrian-Belarusian Joint committee. 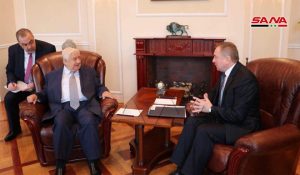 During the meeting, al-Moallem briefed the Belarusian side on different political and field developments, underlining Syria’s rejection of any foreign intervention in its domestic affairs and appreciating stances of Belarus in support of Syria.

Makei, on his part, welcomed al-Moallem and the accompanying delegation, saying that the visit is an indication to the strong relations which connect the two friendly countries.

He stressed that Belarus will continue standing by Syria and its people in the face of terrorism, “Belarus supports Syria’s sovereignty and territorial integrity, Makei said, hoping security and stability would return to the whole Syrian territory.

Al-Moallem arrived in Minsk in response to an official invitation by Belarus Foreign Minister.

2019-07-22
m.eyon
Share
Previous Update-Fourteen civilians including two children martyred in terrorist rocket attacks in Hama and Aleppo
Next A hike in Lattakia to enjoy the wonderful landscapes and the pristine nature