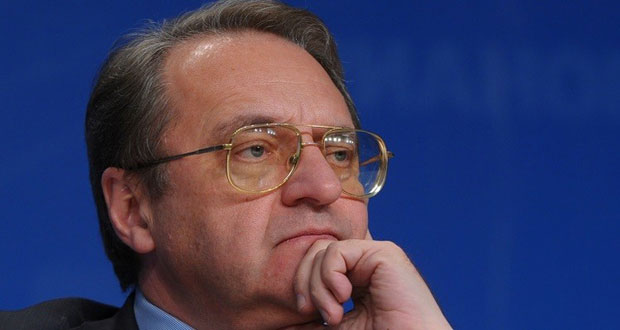 Damascus, SANA – The systematic terrorism overrunning the region and the repercussions of the situation in Syria on the Palestinian issue topped the discussions between Russia’s Deputy Foreign Minister and Special Representative to Africa and the Middle East Mikhail Bogdanov and a delegation from Popular Front for the Liberation of Palestine – General Command (PFLP-GC).

The meeting held in Moscow on Sunday tackled the intricacies of the Palestinian file and how they relate with the Arab countries around it – Syria in particular- in addition to the situation of the Palestinian refugees and the danger posed by terrorists’ attempts to displace them from their camps, according to a PFLP-GC statement.

The delegation explained their perspective regarding the coercive displacement of the Palestinians from their camps in Syria by the armed terrorist groups.

The delegation stressed that Syria has been exposed to a U.S.-western-Zionist conspiracy, which is backed by some regimes in the region with the aim of liquidating the Palestinian issue since Syria is the main supporter of the cause.

The meeting also touched upon the constant Israeli attempts of Judaizing the West Bank, particularly the occupied Jerusalem, where the Palestinians are suffering from a blockade and their sanctities are being desecrated.

Bogdanov underlined his country’s constant and principled support to the Palestinian issue, expressing appreciation of the efforts concerted by the PFLP-GC for achieving national unity.

He expressed Moscow’s readiness to receive all the Palestinian factions and adopt any dialogues among them.