Slutsky and Bogdanov: Russia is continuous in supporting Syria against terrorism 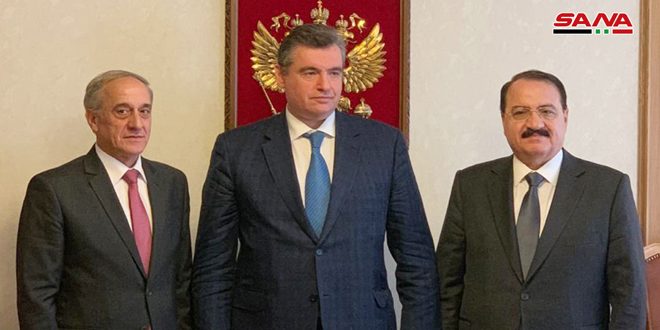 Moscow, SANA – Chairman of the Russian State Duma’s International Affairs Committee Leonid Slutsky renewed Russia’s will to continue supporting Syria in counterterrorism and in the efforts exerted for restoring stability and security to it.

During his meeting with Assistant Foreign and Expatriates Minister Ayman Sousan in Moscow Tuesday, Slutsky stressed that Russia’s stance is firm with regards to the occupied Syrian Golan, calling for avoiding acts that would violate sovereignty of Syria and lead to stirring tension in the region.

The latest developments in Syria were discussed during the meeting, as Syria’s sovereignty and territorial integrity were asserted.

For his part, Sousan expressed Syria’s appreciation of Russia’s supportive stances in the face of the unjust war waged against Syria including the economic blockade that increases the suffering of the Syrians.

Bogdanov stressed the importance of approaching policies that serve the interests of peoples of the region away from foreign interference in their domestic affairs.