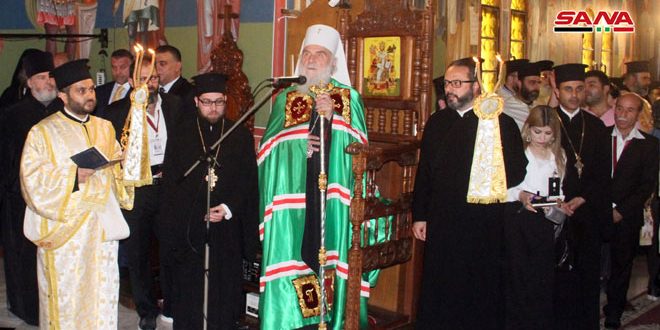 Tartous/Homs, SANA – Accompanied by Greek Orthodox Patriarch of Antioch and All East John X Yazigi, Patriarch Irinej of Serbia visited Lady of Balmana Monastery in Balmana village in Banias countryside in Tartous Province. A mass was held and prayers were performed for peace in Syria. 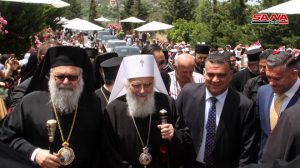 Patriarch Irinej stressed in a sermon that he is going to pass the real image of what Syria is witnessing to his country.

He pointed out to what he has witnessed during his visit with regards to the terrorist attacks launched against churches and monasteries in the country, adding that his country is following up what is going on in Syria and the sufferings of its people. 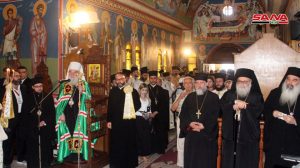 For his part, Bishop Athanasius Fahd, Metropolitan of Lattakia and Dependencies, said that Lady of Balmana Monastery is an important religious hub in the country, adding that Christians are deeply rooted in their country where they live in fraternity with their fellow citizens. 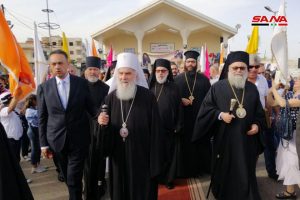 Later, Patriarch Irinej visited St. Goerge Monastery in al-Nadara Valley in Homs countryside, taking part in mass there where he thanked the locals for their hospitality, presenting to the Monastery an icon depicting St. Sava,, the founder of the Serbian church.