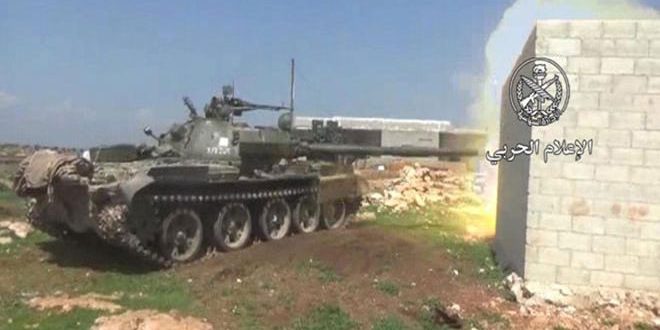 SANA reporter said that the army units carried out intensive operations at the dawn on the gatherings and directions  of the movement of” Jabhat al-Nusra” terrorists and other groups affiliated to in the outskirts of Mourek , az-Zakat and al-Arba’in in northern Hama.

The operations resulted in the killing and injury of many terrorists, some of them of foreign nationalities, infiltrated across the Turkish border .

Caches and quantities of weapons and ammunition for terrorists were destroyed during the operations.

army breaches Hama responds terrorists 2019-05-28
ghossoun
Share
Previous SANA reporter: Army responds to terrorist groups’ breach of the de-escalation zone agreement, destroys a number of their dens in the outskirts of Mourek , az-Zakat and al-Arba’in in northern Hama
Next Cuban Communist Party hails steadfastness of Syria in its war on terrorism