Russian MoD denies US claims of chemical attack in Idleb 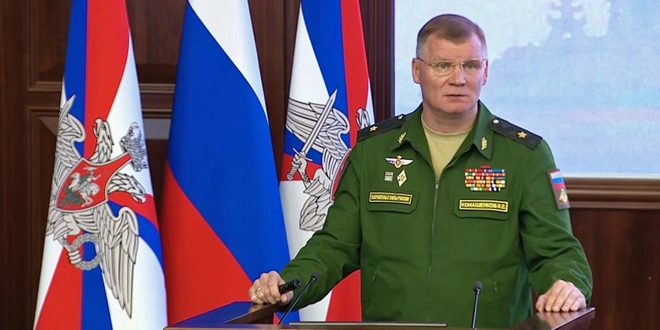 Moscow, SANA – The Russian Ministry of Defense denied the claims that the United States is trying to promote and that terrorist groups and some media outlets affiliated to them are spreading about the use of chemical weapons in the de-escalation zone in Idleb.

The Russian Defense Ministry’s spokesman Maj. Gen. Igor Konashekov said that no chemical attacks took place in the de-escalation zone in Idleb on May 19th as the US claims, stressing that all the attempts by the US State Department to fabricate another story about chemical attack are merely political cover for the terrorists’ attempts to destabilize the situation in Idleb.

He said it isn’t surprising for the US State Department to try and force another lie on the world about the use of chemical weapons in Idleb using only Jabhat al-Nusra terrorists as eyewitnesses.

Konashekov noted that these recent US narratives about the Syrian Army using chemical weapons in Idleb come at a time when even the “Syrian Human Rights Observatory” and the “White Helmets,” which are two organizations created by the West, are saying that there is no information about this alleged attack or its victims.

During the past years, terrorists and their masters abroad fabricated various incidents related to chemical weapons to justify foreign aggression against Syria, with the Organization for the Prohibition of Chemical Weapons (OPCW) being complicit as revealed recently by a document proving that the OPCW covered up a report by its own experts proving that the chemical incident in Douma was staged by terrorists.