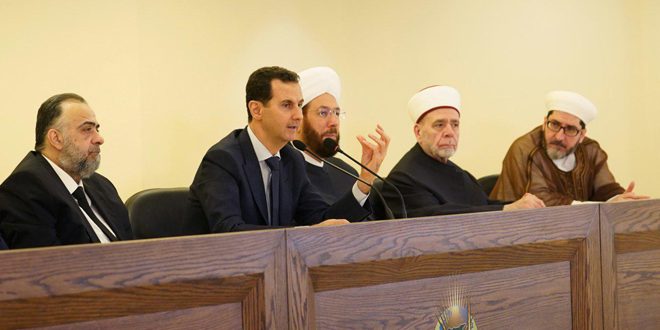 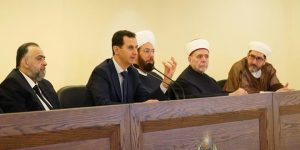 President al-Assad toured the center and listened to a brief by Sheikh Afyouni about the sections it includes, mainly, the National Institute for qualifying the Imams and preachers in all cities, the International Institute for the Arab and Religious sciences for those who wish to study the religious sciences from countries of the Levant as well as the section of monitoring the extremist mentalities.

The center also includes a section on combating the extremist mentality, center of scientific Research, a library and a number of auditoriums.

Sheikh Afyouni briefed President al-Assad through a short film on the stages of implementing the project that lasted two years and three months.

Later, President al-Assad met a number of Damascus scholars who attended the opening ceremony of the center and delivered a speech saying that fulfilling this center and launching its works in this holy month is an indication and a message that this month is the month of work, not a month of delay or laziness as some people perceive. 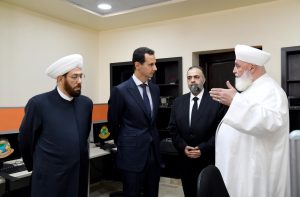 The President added that the Syrian people as a whole combat terrorism and extremism through steadfastness as a first… the Syrian army was fighting terrorism that came out of extremism… the scholars were combating extremism that gives birth to terrorism.

“Islam is innocent from the accusations attributed to it, countries of Levant throughout history are moderate in the religious and social framework… I tell you that God has wanted us to be a moderate nation… and of course, I will not talk about the role of Muslim Brotherhood in the religious framework and their role which distorted  Islam and harmed its image throughout decades, particularly through inserting the concept of violence into the religion of good and right,” President al-Assad said.

He went on to say that for scholars this is a self-evidence, this is not only for you, but this is applied to all Syrian citizens and the Arab scholars and people too.

“The center is a station in the context of combating terrorism… as I said it is not a start, we have to think about where we should stop… what is our place, because when we plan for future, we have to set off from the presence,” the President affirmed.

President al-Assad said that if we ask any Syrian citizen about where we stand today… where Syria stands after 9 years of war in the framework of terrorism and extremism… the answer maybe, by the majority of the Syrians, that this extremism led to a state… the indicator of extremism regarding society is the sectarian state as a first degree… I say this is a normal reaction when there would be a sectarian proposal which was used as a tool at the very beginning of the war. 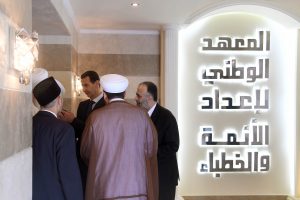 ” I say with confidence that that vision is unrealistic and untrue… the situation today as for the Syrian society is not only better from the beginning of the war, but it is also better than the stage before the war,” President al-Assad said.

He added that it is true that that war was external, but the elements were internal… this revision made us revise our vision to ourselves as Syrians with all spectrum to make contacts with ourselves more. 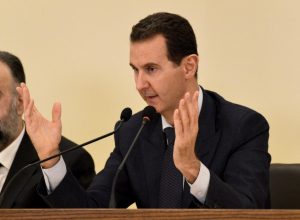 President al-Assad went on to say that the only place in the State which depends on religion in a direct way as a law.. is the personal law… marriage, divorce, inheritance and others, and even in this law there is a freedom to all sections as to decide which issues suit them.. this law which depends on religions is secular because it leaves a freedom.. so there is no relation between secularism and religion… atheism is atheism and belief is belief… so I say that the situation today is better than before the war, when we can distinguish, that means we can have a clear vision.. and when we can see clearly, we can protect and preserve the country, and protect what is related to it as policy, morals, patriotism and so.

“The suffering during that war was connected to religious extremism… sure, this extremism took up the international concern after the 9/11 incidents in New York as you all know… and wahhabism has contributed to consolidating this image to become a reality… even terrorism in Syria was not stemmed from Syrian traditions, but it came from outside, and it became a reality in Syria… so it is a social product, and you will not succeed in this task in this center, on  social media or in your mosques without treating the gaps which became present in this society that produce an extremism and then comes the religious mentality,” President al-Assad said. 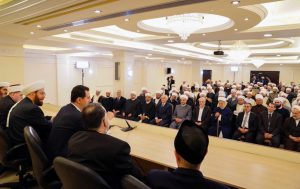 “The true religion needs a balanced society… we meet a lot of people who have an incorrect concept about religion, they believe that religion came to cancel all needs of Man or to stand against the needs of Man… the reality is not the case.. religion came to suit the needs and desires, but, at the same time, it came to regulate them, this contradiction creates unbalance for some persons, and unbalance leads to a kind of extremism,” President al-Assad said.

The President added that the last point… all what I have said depends on one thing.. which is awareness, Man can’t be aware in a field and unconscious  in another domain because awareness is related to thinking and thinking is related to dialogue.