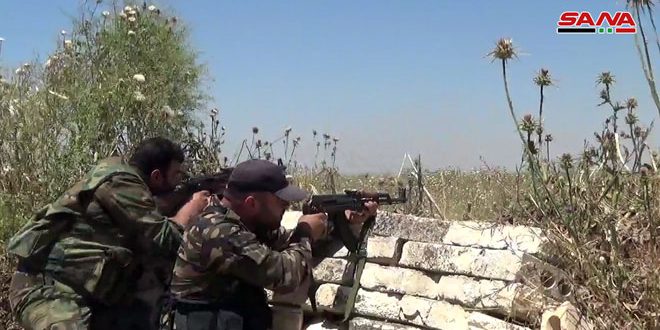 Hama, SANA-Units of the Syrian Arab Army destroyed dens of Jabhat al-Nusra terrorists in a number of villages and towns in the countryside of Hama and Idleb in framework of their retaliation to terrorists’ breaches of the de-escalation zone agreement.

SANA reporter in Hama said that army units conducted artillery and rocket strikes against gatherings and fortifications of Jabhat al-Nusra terrorists in the villages of Jisr Beit al-Ras and al-Hawiz in Hama northwestern countryside.

The reporter added that a number of terrorists’ dens were destroyed and a number of them were killed and others were injured.

On Tuesday, army units killed a large number of terrorists and destroyed their dens and positions in the towns of al-Latamina, Kafr Zita, al-Arbain and al-Zakat in Hama countryside and in Khan Sheikhoun in Idleb southern countryside.